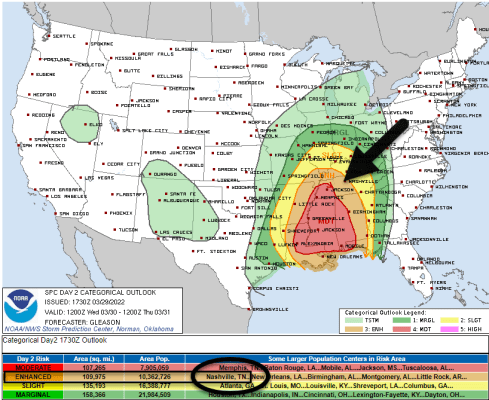 Examining “it’s a three out of five weather day tomorrow oh noes,” what it means and what it does not mean, alt. title: respirating into a paper bag

3. TIMING. A squall line is going to come speeding through here probably early evening Wednesday night. “7-8 PM” is NWS-Nashville’s thought which seems about right to me (HRRR model agrees, below) tho that ETA could wiggle earlier or later than that, so look for an update (changes?) tonight and tomorrow.

4. WILL IT BE BAD? SPC gave this system a 3 of 5 mainly due to the straight line wind damage threat, the probability of which is 30% within 25 miles of you. It’s not rated that high because of a big scary hairy tornado threat. The tornado threat is not a superbig concern. SPC has the probability of tornado “only” at 5% within 25 miles of you. Same for hail, 5%. Why the lower concern of tornadoes? The system will have plenty of wind ingredients (shear, helicity, etc.) to rotate storms but the other basic necessary ingredient, instability/CAPE, is largely missing in all the models.

5. THE TORNADO THREAT IS CONDITIONAL.

Tomorrow afternoon will be key. Has the sun been out? Is the temp up? Are dewpoints closer to 60° or 55°? If the answers are yes, watch out, a few tornadoes could spin up in the line. If not, nah.

Or to return to the analogy, this system could be dangerous if it can fix its quarterback play (instability), and everything else works the way we think it should.

It’s . . . conditional. We won’t know how it might end until we see a few quarters.

We’ll be closely watching how much instability does or does not build Wednesday afternoon. We’ll have a better handle on the risk of tornadoes then.

6. DAMAGING STRAIGHT LINE WINDS ARE THE MAIN CONCERN. We may even see 70 MPH wind gusts in isolated spots embedded in the line.

7. FLOODING. Not a big concern, but flooding may be possible in the usual (mostly urban) spots when the rain is heaviest. We’re forecast for just over 1″, which most of us should be able to handle. Although your games Wednesday night will be rained out, sorry.

More tonight, tomorrow, and throughout the event.