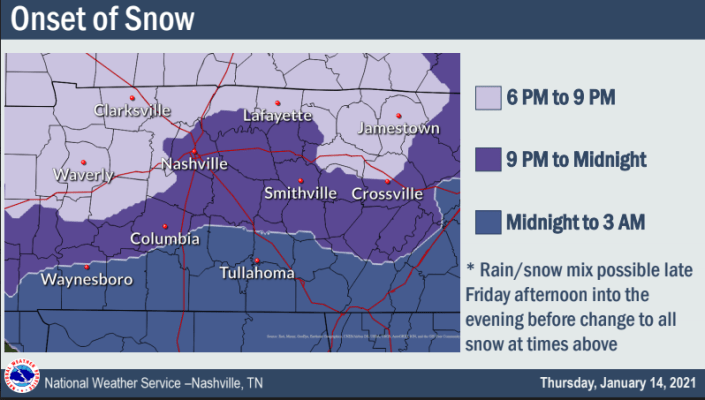 Friday Night – Saturday Morning Snow: What Time, How Much, Accumulation Potential, & No, We Aren’t Sure About Much Of This.

Models indicate snow Friday night lasting off and on overnight into Saturday morning.

Rain is expected to change to snow Friday night between 9 PM and midnight:

Scenario 2. This slightly more likely, the higher end, a half inch to 1″ by Saturday morning.

Scenario 3: The most likely outcome is under a half inch:

Where’s It Coming From?

A system passing north of us. Spinning us some moisture on its south side.

Flakes should be light; initial flakes may be zapped by the Dry Air Monster or suffer splat melt as flakes nestle onto an earth slightly warmer than the air above it. But after that we may see accumulation.

What The Models Say About Accumulation

The HRRR model deposits 1″ on us by noon Saturday:

All other models running at 18z show way less than that.

Check out the Hi-Res GFS with the Ultimate Troll Job #Snowdome:

The NWS Blend of Models is likely the best guidance, it puts down 0.4″:

You Sure About This?

Forecast confidence is “low to medium” mostly due to forecasters questioning whether enough moisture will get in here. Some data this afternoon was favorable for an accumulating snowfall (plenty of lift aloft, large depth of dendritic growth zone, and other super nerdy things you probably don’t care about). This is not the worst snow setup (cold front chasing moisture), and it’s not the best setup (deep 700 mb low passing SE of us with a powerful high pressure in the Great Plains). This somewhere in between.

More info tonight, Friday, and through the event here but mostly on Twitter @NashSevereWx.

BTW, check out the below temps, but wind chills willi be below freezing all weekend.