Two waves of storms, both with severe potential.

This wave ended. Frequent lightning and heavy rain. There is a “cap” in place that kept storms from forming near the surface. This limited their intensity.

Below is HRRR model showing strong storms coming through here around 6 PM.

This second wave has potential to be more organized.

The main uncertainty is whether we will become unstable enough for severe storms to turn into bad damaging wind and tornado producers.

This morning, STP values were predicted to be high before Wave #2 arrives … 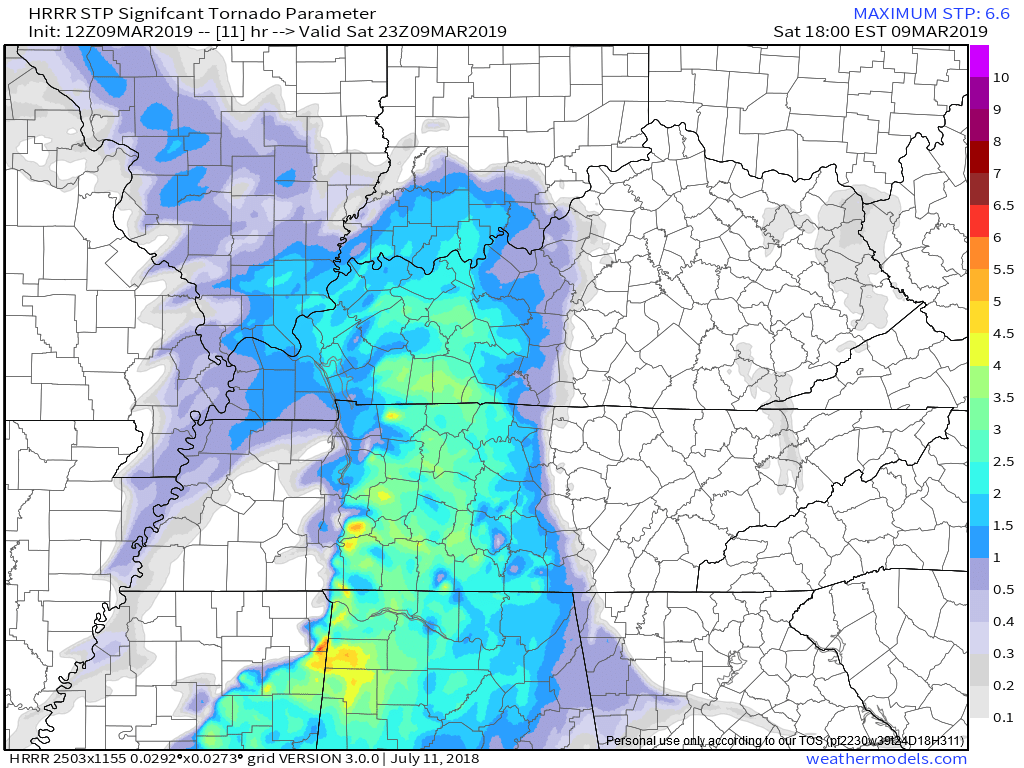 Recent HRRR model runs show STP to drop off north of I-40, but it’s still pretty decent south of I-40.

Thus the concern is greater the further south you are.

But first, what exactly are we talking about with these waves?

All possible, but some are more likely than others. More likely in Wave #2 than Wave #1.

Of all hazards this is most likely.

First, for non-thunderstorm winds, there is a Wind Advisory from noon to 9 PM. Winds sustained 20-30 MPH, gusting to 45 MPH. 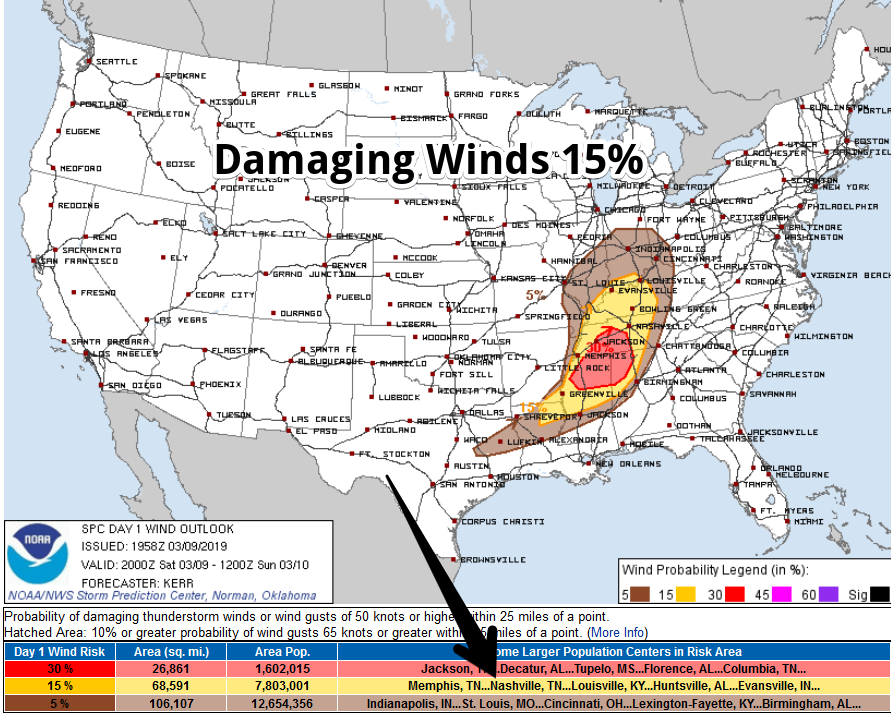 Probability of a tornado within 25 miles of you is 5%: 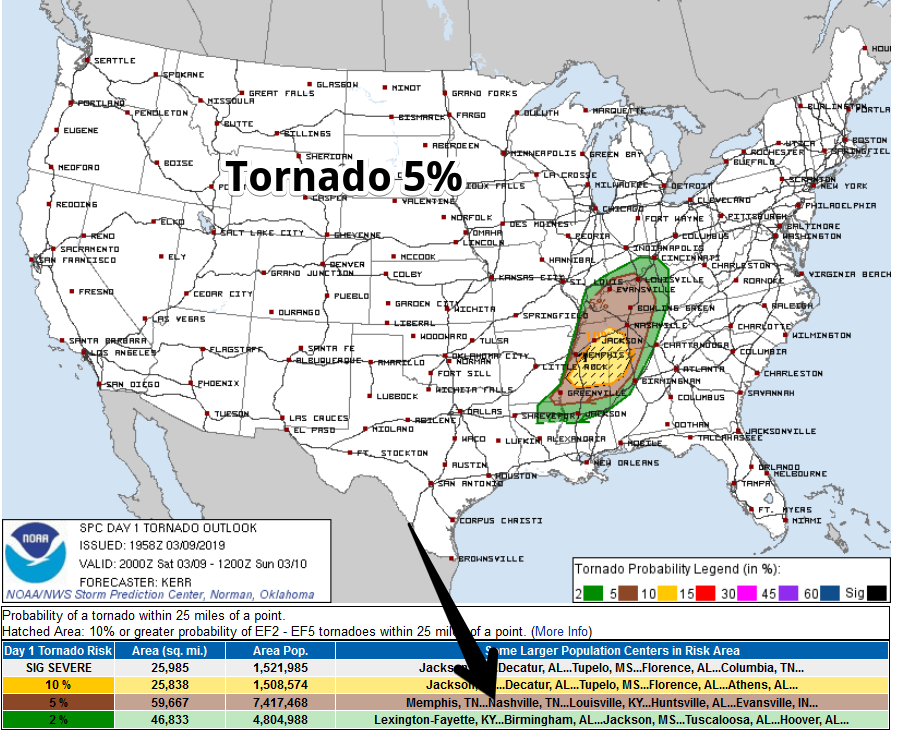 Note the shift in SPC’s outlook area, it’s a bit further south vs where it was this morning, suggesting concern instability won’t make it far enough north. However, it’s close enough to warrant inclusion for everyone in Nashville and Williamson County in the Tornado Watch.

Here are the watch details:

The watch simply means we have the ingredients in place to generate storms that could produce strong winds, tornadoes and some hail. Storms have been limited so far today due to the cap, but the second line this evening could break through and reach severe limits. 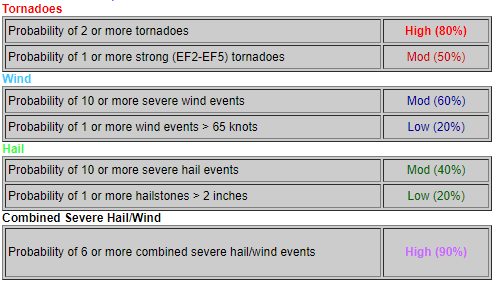 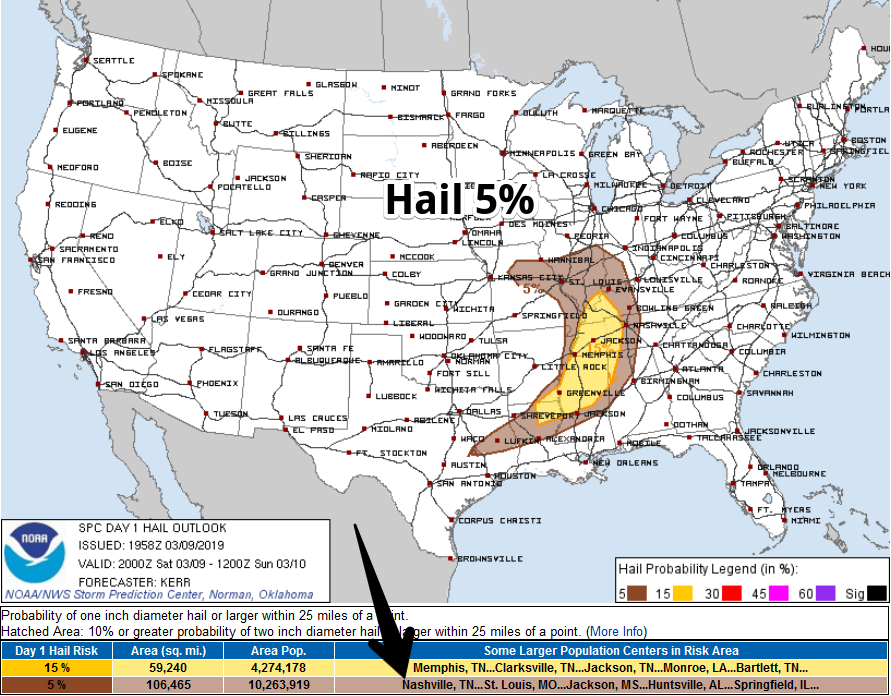 Not really concerned. Expecting 1″ to 1.5″ total. I mention flooding because the ground is saturated from Friday’s rain. A few storms may “train” over an area, therefore brief, localized ponding and “streets that usually flood due to drainage problems” may have temporary issues.

To get flash flooding we’d need about 1.6″ to fall in an hour and there’s no reason to think that much will fall that fast.

As for river flooding obviously the Cumberland and Stones Rivers are up but because dams have been releasing water all week, but the system should be able to reasonably tolerate this event.

Development of severe thunderstorms (mainly with Wave #2) will depend on how warm and unstable the atmosphere becomes after the first batch of showers and storms.

We monitor atmospheric instability mainly by watching the dewpoints (currently we’re at 54° and rising). Low 60°s will feed storms.We also watch the SBCAPE and MLCAPE numbers on the SPC’s mesoanalysis site. Anything around 500 j/kg will fuel storms.

If instability is modest, winds aloft (which will be s-c-r-e-a-m-i-n-g fast) will tear apart any building storm. But if instability is high enough, winds will rotate the storms, not tear them apart.

Often, Wave #1 “uses up” all the instability, leaving nothing behind for Wave #2. This is what we hope happens tonight. The Euro model thinks that’s exactly what will happen, but the HRRR disagrees, asking which to believe is like choosing which ear you prefer (for me it’s the left, right one doesn’t really work great, but I digress).

So, now, we wait. We watch the radar. Models are great, but they’re often wrong. Radar and satellite tells us exactly what’s happening.

Second, if you’re new to severe weather, or you’re like 95% of college graduates confused by “Watch” vs “Warning,” or you’re just wondering how to prepare or respond to a tornado warning, we made this page for you.

Expect forecast revisions. Forecast updates, ETAs, storm hazards, and storm warnings will not be published to this blog because it’s too slow. Follow our Twitter page. We’ll also be on Periscope (there will be a link to that on Twitter) if there is a warning. Turn on your favorite local TV meteorologist.

The actual cold front will push through Middle Tennessee later tonight, although temperatures will only fall back to seasonal readings once the post-frontal air mass settles in. The next active system comes through Wednesday night and Thursday, and it is now looking more like a severe event than a multi-day heavy rain event. Therefore, the new 7-day quantitative precipitation forecast is going to show less than previously thought, which is welcome news given our continued elevated rivers.