The Euro model spreads about 1″ of rain total through the middle of Friday across an area along, and north and south of, I-40. The 1″ swath-o-rain looks on a map like someone laid a horizontal pickle over Nashville and Will Co, extending east and west. That 1″ total is probably an exaggeration of rain totals but even at half that Friday looks to wash out, and maybe create sporty ball cancellations Saturday.

A second rain and storm “event” may materialize Saturday afternoon into Saturday night.

From NWS-Nashville’s AM forecast discussion:

It’s severe weather season. Saturday expect a negatively tilted system setting up to our northwest. Thing may be too far away to cause us real problems – hence the model disagreement – but negatively tilted March events pack big punches. Where is the big question right now. Currently SPC thinks threat is west of us, but not by much: 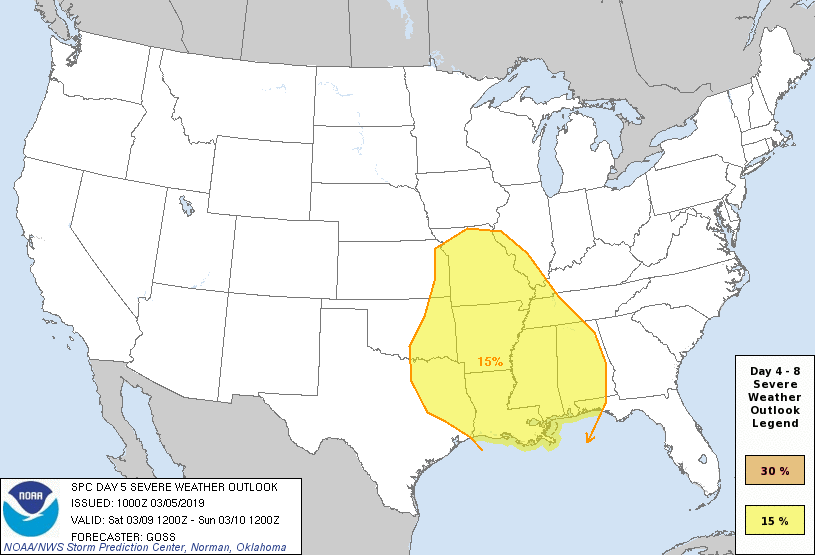 If I had to ETA storms it’d be 6 PM to midnight Saturday, perhaps coming earlier or later. I prefer a nighttime arrival, which will limit CAPE and other storm ingredients.

From Thu night thru Mon night, it looks like most of the mid state will experience total [rainfall] values from around 2.5 inches to around 3.5 inches.

Dams are releasing water – keeping some rivers up (I’m looking at you, Stones, Cumberland) – to create capacity for what’s ahead. Flash flooding isn’t being highlighted (yet) by NWS-Nashville, but if we get a series of thunderstorms trucking through here we may be dealing with additional, or at least continued, flooding.

Drying out Sunday and Monday, then: