Another Rain Event Sunday through Tuesday

As I write it’s 25° with an uncommon northeast wind. No worries, we’re warming up.

Yesterday, Mayor Briley allocated money to modernize the sirens. A big step forward well celebrated on Twitter because previously, modernization had support but no money.

But this isn’t solved yet. We have more work to do. Next, Metro City Council has to approve it. That vote will be February 19. If it passes, there’s a purchase and implementation process.

So, yesterday’s news was a big step in the right direction, but the sirens are still a mess. We can buy a new system, but we need to use it the right way. We will stay on it.

Rain will arrive from the southwest. Models show it scattered and light/off and on.

If precip arrives early Sunday morning, it could start off as a rain/snow mix, then quickly change to rain. This is unlikely because (1) precip probably won’t arrive early enough, by the time it gets here we’ll be too warm, (2) there won’t be enough of it, and (3) surfaces will be too warm to worry about any impacts.

Only the NAM3 model thinks we will have early Sunday morning rain. The HRRR and Euro hold it off until late morning – noon.

NWS-Nashville forecasts only 0.26″ through Sunday 6 PM.

The probability of excessive rainfall leading to flash flooding is low, only 5% to 10% per WPC:

Right now it would take at least 1.3″ or more falling in one hour, at least 1.4″ or more in three hours, or at least 1.8″ or more in six hours to cause flash flood concerns. That number should increase tomorrow. I don’t see any support in any of the models that much rain will fall that fast. Sunday flooding concerns are therefore very low.

Heavier rain will be NW of us, but we should probably have a rainy Sunday night and Monday. About 1″ total is forecast between Sunday 6 PM to Monday 6 PM, with warmer temps Monday (high 60°) and more humidity. We may even squeeze out a thunderstorm or two, but nothing severe.

WPC still has us under a 5% to 10% probability of excessive rainfall causing flash flooding Monday. The flood risk is greater to our west and northwest:

1″ may be too high; the Euro model is trending toward less/very little/no rain Monday, which would be great because we don’t need more of it. NAM3 only has a little rain during the day Monday. I hope that’s correct.

Models agree about this. Rain should be heaviest late Monday night through mid-day Tuesday. Flooding concerns highest during this time.

I don’t see a repeat of last Wednesday in the data but of course this will be closely watched. Flooding might be a concern. I am encouraged by the model data showing not that much rain Sunday into Monday.

Total rainfall Sunday through Tuesday is in the 2″ to 2.5″ range: 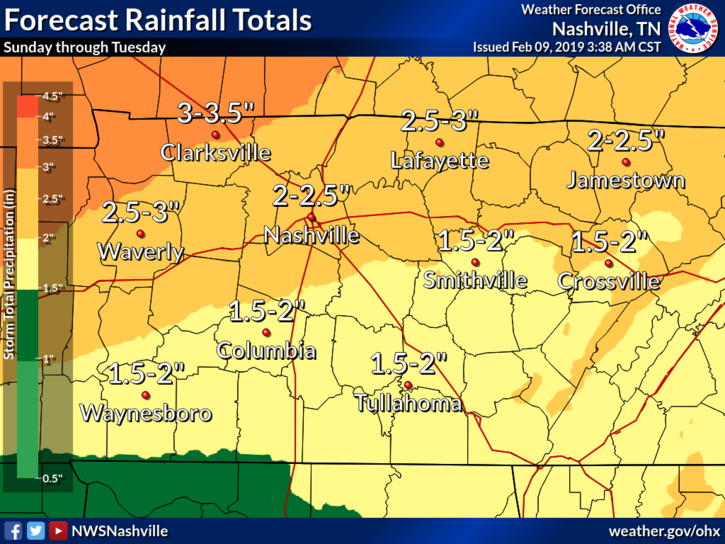 If we can spread this rain out over three days, we may be OK. Problem is, models show very high precipitable water content – 2+ standard deviations above normal – for this time of year. Flooding is a greater worry for those northwest of us, but if that rain axis shifts a bit further southeast, we may have more very real flooding problems here Tuesday. WPC doesn’t issue excessive rainfall outlook graphics four days away, but I think it’s safe to say Tuesday is our riskiest flood day.

If we have flooding rains Tuesday, it won’t even be close to May 2010, which was in another flood universe, but the risk of water covering roads or filling up your basement is the same, no matter how much it rained once before.