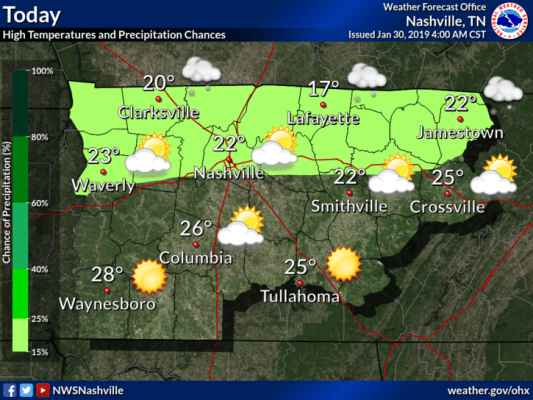 But, you should not have been unprepared, or shocked, it happened. This morning’s snow was in the range of possibility.

We are writing about this on our website (published soon). Euro, NAM3, HRRR all have some flakes flying tomorrow morning. But I would not call it "decent" snow. More to follow. https://t.co/L6x9BvZEgM

Yesterday’s forecast, published at 10:32 AM, had a long discussion about this.

No travel impacts expected, but this will have to be closely watched. Anything that falls will stick — if there’s enough of it.

And there probably won’t be.

Look outside. Very little is sticking. The sticking was brief.

HRRR model shows Wednesday morning dusting. See below. NAM3 model disagrees, dries it out before getting here. Euro model doesn't dry it out, but thinks it misses us and stays in Kentucky. "A dusting is possible north of I-40 and west of I-65" — @NWSNashville pic.twitter.com/LbAdh7dZHn

HRRR thinks light snow/dusting will make it us, only for the Dry Air Monster to start gobbling as it arrives, during the AM commute. Other models have no snow. We’ll be watching with a healthy heaping of skepticism. pic.twitter.com/qtZufagNLG

“Light snow possible tonight near the Kentucky border followed by Arctic cold for all of Middle Tennessee the next two days.” Special Weather Statement from ⁦@NWSNashville⁩ https://t.co/7DxJAMAeUx

Red colors indicating some flurries/light snow showers coming in from the NW with the clipper system. Dry Air Monster will eat most of it. But, anything that makes it through could stick as road surfaces are near or below freezing. If anything falls, use some caution. ^al pic.twitter.com/Ig3rqwYjOb

We were up at 4:46 AM this morning live tweeting.

Along came trolls with 20/20 hindsight, critical of the forecaster for her or his inability to accurately predict the future.

Thing is, I am not unhappy with our forecast.

I hope you get from us information, nuance, uncertainty, and data that contradicts most likely outcomes, so you can be prepared for all contingencies specific to your situation. You have to want that information. You have to read it. If you didn’t, I’m sure it was unexpected.

In hindsight, it either snowed or it didn’t.

But snow forecasting in Middle Tennessee should not be a yes/no call. It’s usually so uncertain. The problem with a “yes/no call” is that it almost always withholds important data contradicting the conclusion. A forecaster should inform you about all possibilities and include a most likely outcome, you should plan/prepare for the range of potential outcomes according to your risk tolerance, then we can both embrace the uncertainty, prepared for whatever the future brings.

Make forecasting about transparency and honesty, admitting the limitations everyone knows we have.

For an excellent thread discussing the complexity of snow forecasting:

From 7+ days ago, mets have been attempting to predict the timing, elevation, rate, & total amount of H2O undergoing phase change (or not), in a turbulent, chaotic env. using equations so complex we need high powered computers to even attempt it…

Now, onto the forecast. 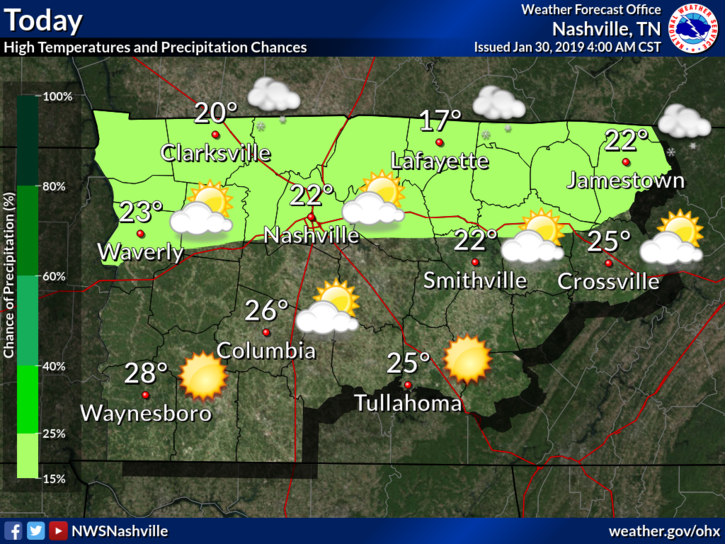 But the temperature is not what matters here; the wind chill is going to be insane. We will be lucky if we hit double digits today (>10º) in terms of the feels like temperature. Translated: limit your time outside today, us southerners are not built to handle such cold air as this.

This morning’s dusting should melt/disappear as it compresses. It had very little liquid content.

A weak disturbance will move to the north of us this evening. The most recent high-resolution models, such as the HRRR (seen below), keep the moisture north of us. Though a flurry or two is possible.

Temperatures overnight are expected to fall to the low teens across Williamson and Davidson Counties. Single digits are not out of the question either. Take note:

Unless your outdoor pets are penguins, they're indoor pets tonight. Low is 11°, wind chills 6°. pic.twitter.com/5zW2tuwRKj

Past This Arctic Air

Tomorrow morning will be the coldest of winter so far.

Tomorrow afternoon should warm to near 40º. The next weather maker will roll in Thursday night, however, we are expected to remain above freezing through the duration of this event. Rainfall amounts will be on the light side, generally around a quarter inch. Rain will end Friday afternoon.

Editor’s Note: No snow concerns right now. But no impacts expected because we’ll warm up fast before lunch.

This weekend: close to 60º!!!!!!!!!! That is going to feel amazing, especially if you are standing outside right now!

A few rain showers are possible Sunday, though that doesn’t appear to be a washout.

The start of next work week will be wet. Models predict a front will approach Monday and Tuesday. There is a chance for a rumble of thunder or two, though that possibility has more factors working against it than for it.

Beyond that system, the Gulf of Mexico will leave its doors open for more rain chances through the week. It may be a wet one.