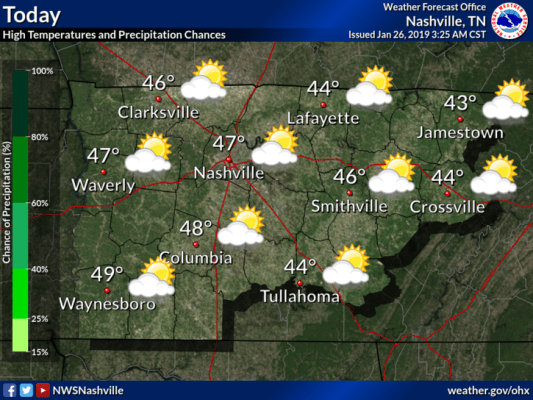 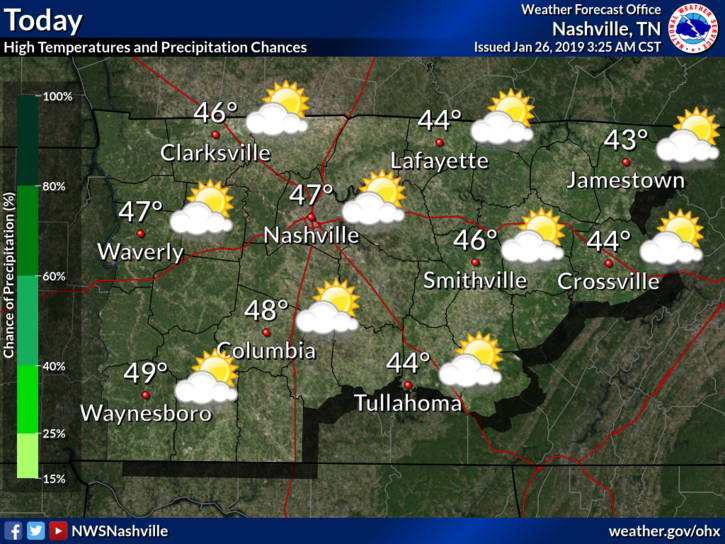 Surface high pressure has settled over our state today bringing mostly clear skies this morning, which will become partly cloudy later today.
With few clouds in place and high pressure influence, we’ll warm into the low 40°s this afternoon.

Late tonight another weak, but dry, cold front will push through. No precip expected, but we’ll wake up with overcast skies on Sunday.

Our Sunday morning temps will be in the low 30°s.

An upper level disturbance will be trailing on the tail end of Saturday’s cold front. This could drop some light flurries to our northeast but no impacts here.

Afternoon high very similar to the day before, in the mid 40°s. Should be a chilly but pleasant day!

On Monday, another strong system will be developing over the Midwest, preparing to march eastward on Monday evening.

Ahead of the system our winds will turn from the southwest, bringing a quick warmup. Even though we’ll begin the day in the upper 20°s/low 30°s, we’ll quickly warm into the mid/upper 50°s on Monday.

We should begin to see effects from this system as early as Monday afternoon when our winds pick up from calm to breezy. This is indication of the system drawing nearer and there is a chance for snow Monday night and Tuesday morning once the cold air pushes into the rain. As of now, models do agree that we’ll see snow, but they don’t agree on when it’ll come.

If you’ve got any errands to run, outdoor activities to attend, or are making a trip to the store – with or without bread and milk – Monday morning/early afternoon are your best bets since we’ll still be dry.

The GFS:
I know, I’m bringing up the goofus model here, but in this case I think it’s worth sharing.
Overall, the GFS is falling in line with other models, in that it expects snow to fall Monday night and Tuesday.
Except it’s moving much faster. According to it, rain will begin Monday evening, switching
over to snow by midnight and then quickly departing western Tennessee by late morning Tuesday.

The EURO, on the other hand, has most rain holding off until the predawn hours Tuesday morning, switching to snow by sunup and not departing Nashville until late afternoon.

Even though the GFS is playing nicely with other models right now, I would still lean towards the timing of the EURO. 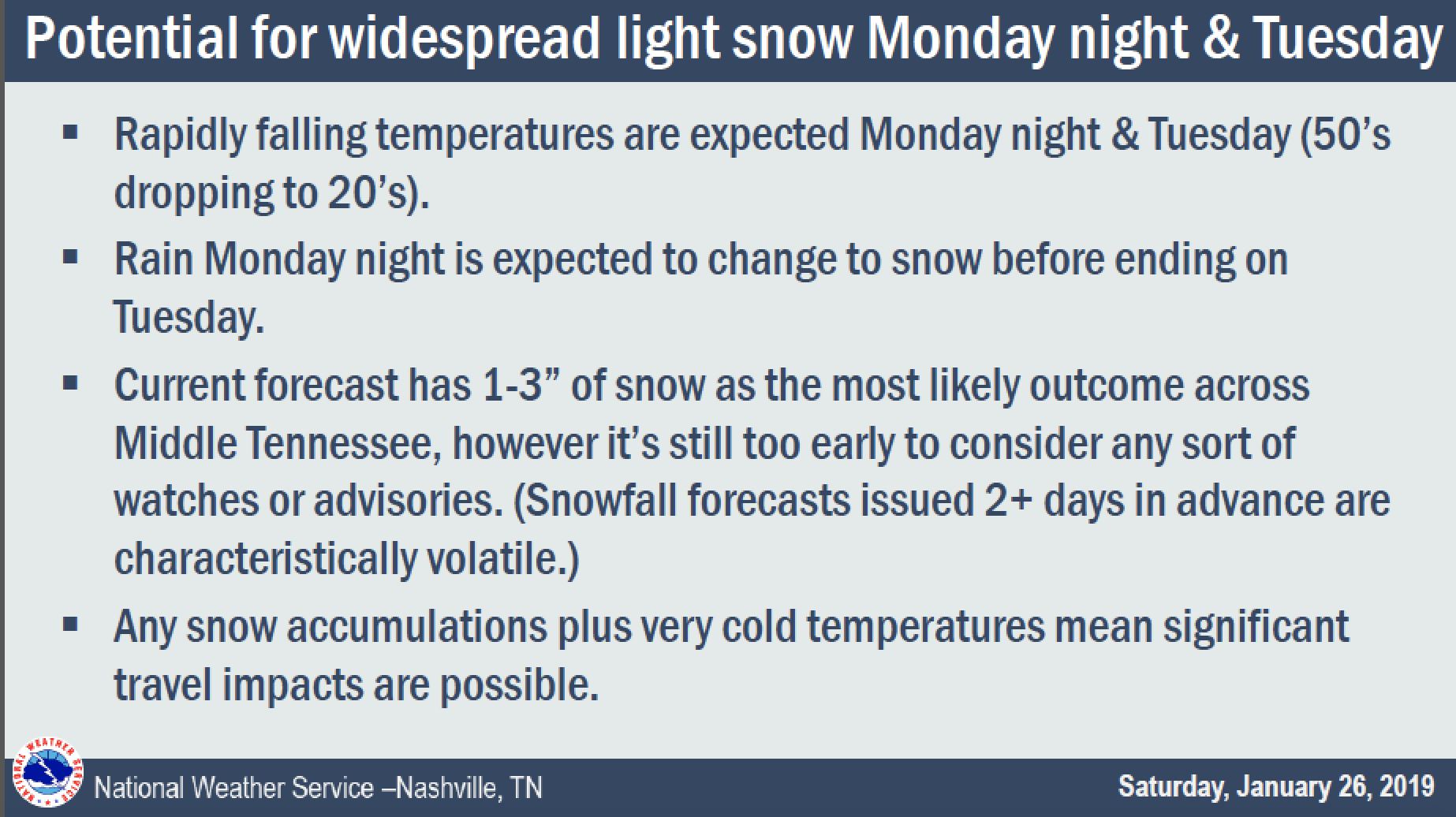 Right now, we’re still too far out to give realistic details on accumulations. Even if we did come up with a snowfall amount, it would be our best guess which will likely change by Monday morning. NWS took a best/worst approach to it in the previously mentioned forecast briefing. 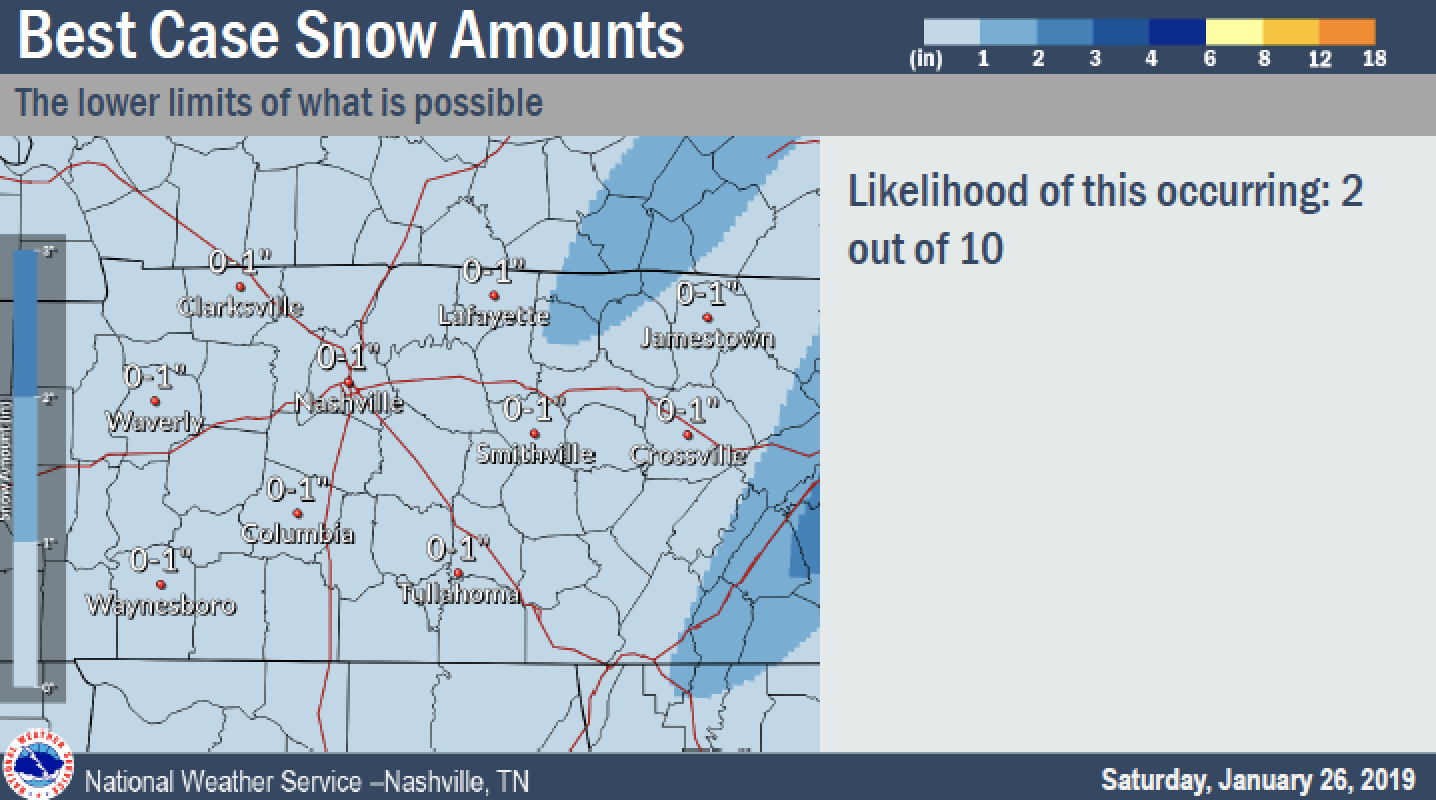 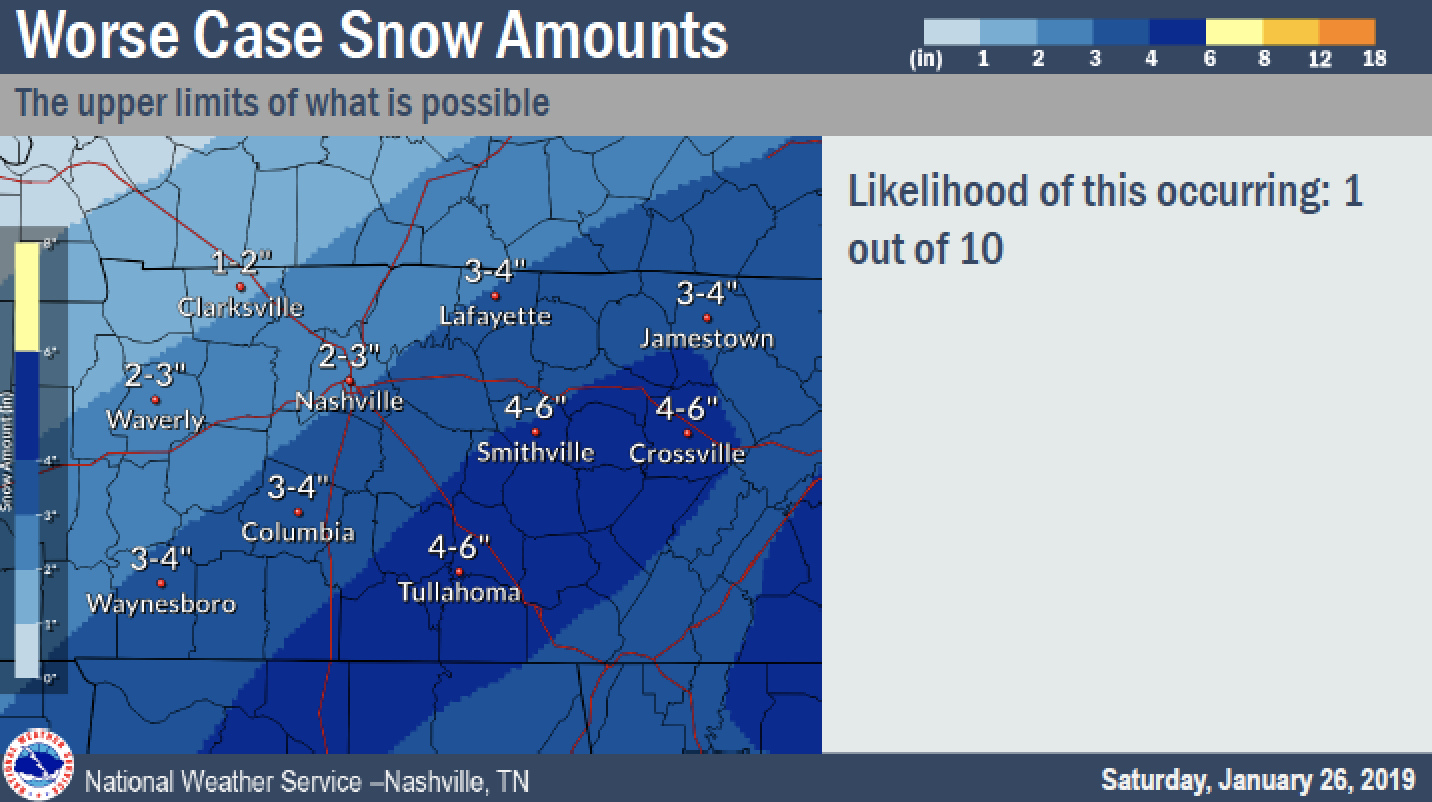 The greatest impacts will likely be seen Tuesday in any scenario. Any precip that does fall, whether rain or snow, will freeze quickly as temps drop to the teens Tuesday evening. Bridges and overpasses and walkways will likely ice over, making it hard to get out and about on Wednesday morning.

The next impact will be the drastic drop in temperatures expected through the midweek. Morning temps on Wednesday and Thursday will be in the low teens with wind chills possibly pushing temps into the single digits. This will keep things from melting through the end of the week.

High temps through the late work week will struggle to reach freezing.

Bundle up! The cold is coming!