Clouds are arriving. Rain is coming Wednesday, and it may turn to snow Wednesday night.

Alert! Editor’s Rant. This isn’t about most of you. Warning: what you’re about to read is indulgent and arguably therapeutic (for me). If you came here for No Rants, Just Weather, I respect that, skip the blue words.

In descending order of beardlyness, Will, Andrew, and I serve up data, interpretation, and opinions in an attempt to predict the future.

Along the way – 100K tweets and counting – I’ve come to expect various responses to an impending snow:

After my similar rant last week, someone tweeted “who hurt you, @NashSevereWx?”

IDK, but I’m sure the answer involves nuance, detail, and study.

The Wind Advisory remains in effect until 3 PM. Winds strong enough to knock over a few things. 40 MPH gusts possible.

Gusty winds can cause tree and branch damage. Loose outdoor objects may be blown around. High profile vehicles, especially those traveling on east-west roadways, may experience travel difficulties.

Rain arrives Wednesday morning. First, hit or miss AM showers. A steadier rain shows up around lunch. HRRR breaks it down from 5 AM to 11 PM Wednesday:

This will be about 1″ of rain, washing out outdoor plans.

Notice the HRRR model above thinks the rain will have pulled east before we get cold enough for snow Wednesday night.

Here’s the NAM3 model, same time, 5 AM Wednesday to Thursday at 1 AM:

If these models are off even a bit, we could see some snow, or, if they’re off an hour or so the other way, just rain.

A few other points to consider:

They think anywhere from 0″ to 1″ of snow Wednesday night. I’m sure they’ll update this tomorrow. 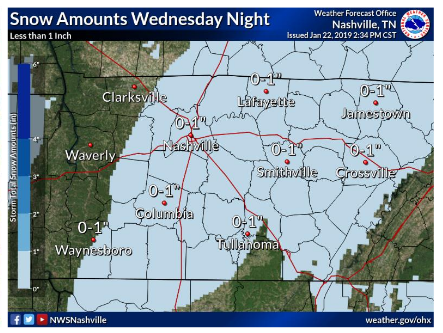 There is hope, snow fans.

There are a few more systems on the horizon with snow potential. The first is Saturday night, but that one looks starved for moisture. Meh.

The second is Tuesday. That one may be something. But remember:

This analogy has limits. In weather, sometimes he kicks that football.