–Updates in blue, below.–Note this likely will be our last long-form blog update for today–Additional information will be posted to Twitter which can be found here and/or here even if you don’t have a Twitter account.

A line of strong to severe thunderstorms has formed and will creep across West Tennessee this afternoon and through Middle Tennessee tonight. Below is an updated run of one model, the HRRR, which is one of my favorite weather models:

Hazard levels for all of Middle Tennessee, from NWS-Nashville, are unchanged from this morning:

Officially, the updated ETA for a line of bad storms is 10 PM to 1 AM for Nashville and Will Co. 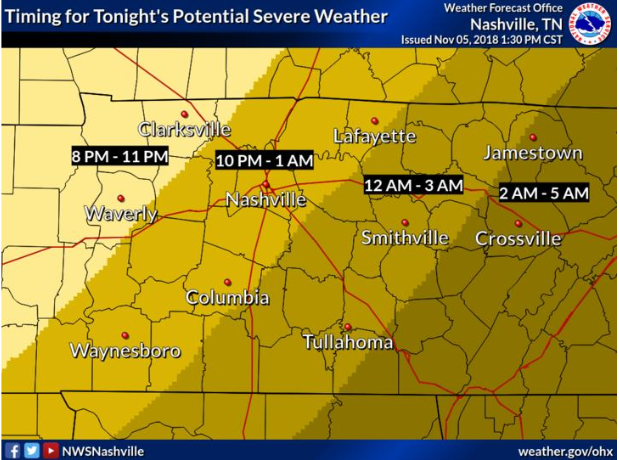 The HRRR model thinks our first rain drops will arrive around 10 PM or so.

The HRRR model then thinks the intense line of storms will arrive between 11 PM and midnight for most of Nashville and Will Co., then around or shortly after midnight for SE Will Co.: 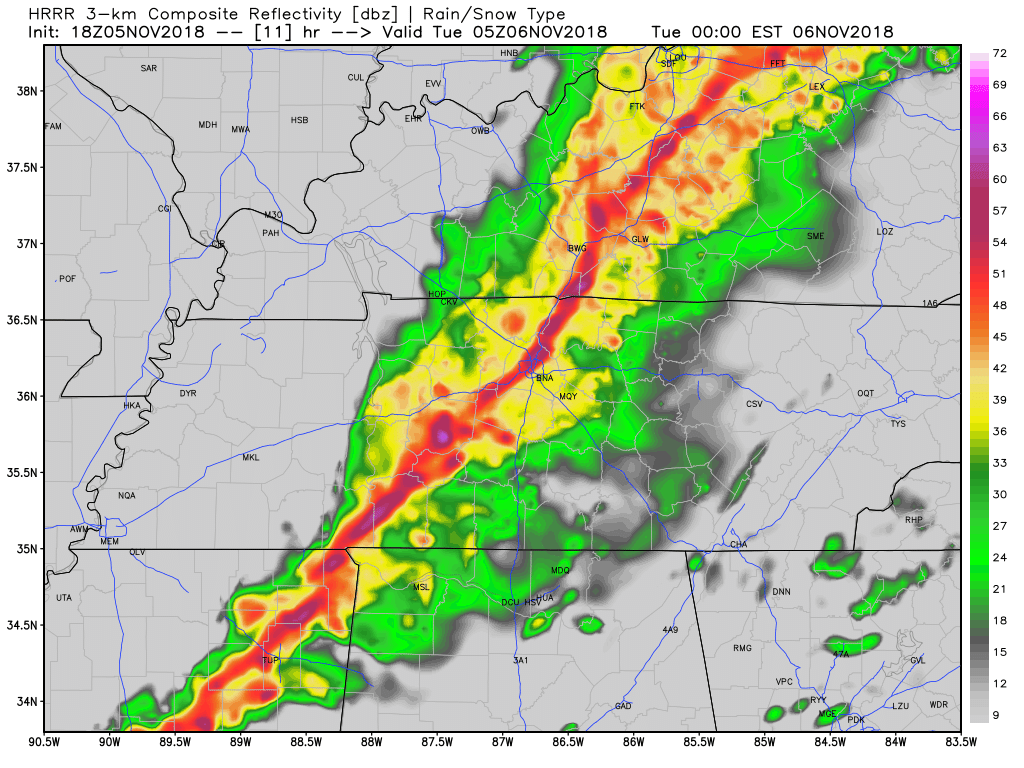 The FV3-NSSL model run from earlier this morning has the storms in the right place as of 2 PM. It thinks the first raindrops will drop in Nashville and Will Co around 8 PM to 9 PM (see below for 8 PM tonight). 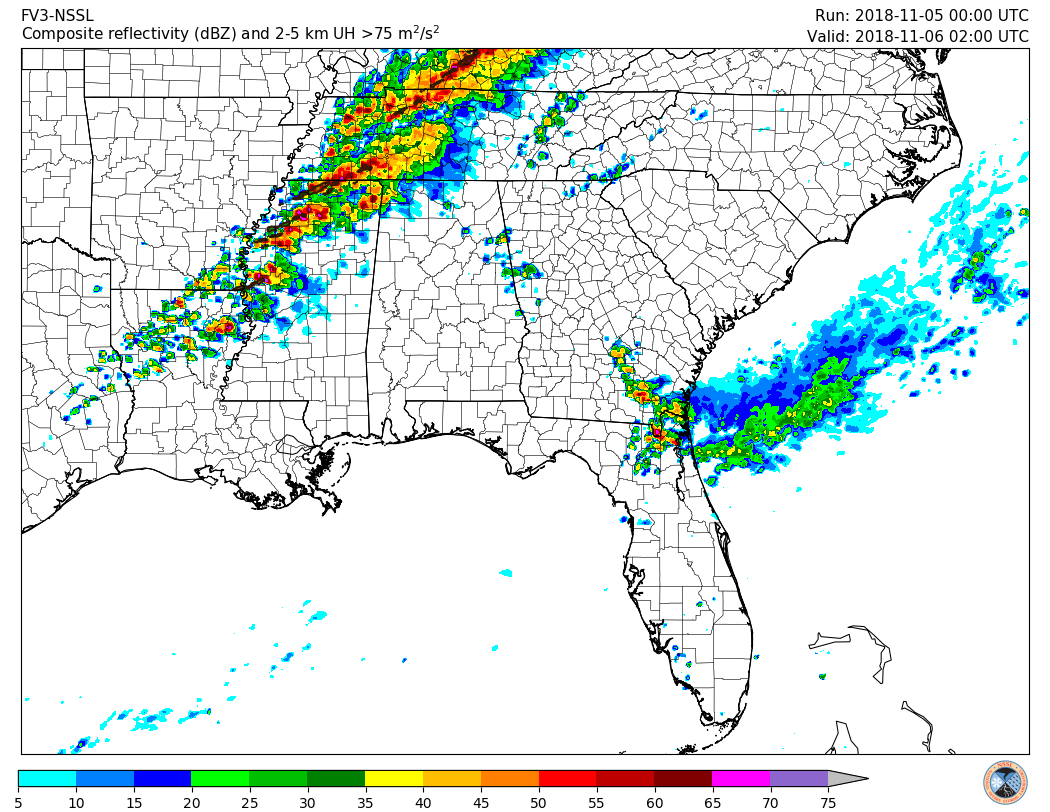 I don’t know which model or models are correct but I would not be surprised if the rain arrives as early as 8 PM, with storms about an hour behind that, or as late as midnight or after. It looks to me that most of that precip now approaching Jackson will go north of us. Going to be a very close call.

Therefore, you should be prepared for either timing.

Nashville and Will Co remain inside a 30% probability of a damaging wind event happening within 25 miles of you tonight. 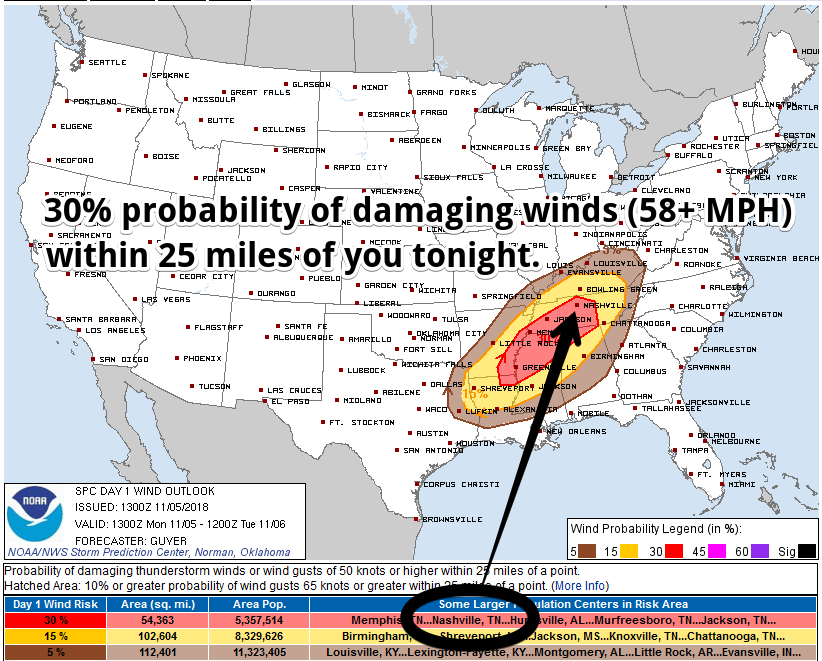 I’ve read too many accounts of damaging wind fatalities from the wind blowing a tree on a vehicle, killing the occupants.

Don’t ride this out in a vehicle under a tree, y’all.

Nashville and Will Co are inside a 10% probability of a tornado happening within 25 miles of you tonight.

Will Co — obviously including Franklin — has a 10% probability of any tornado becoming “significant,” strength EF2 or stronger. 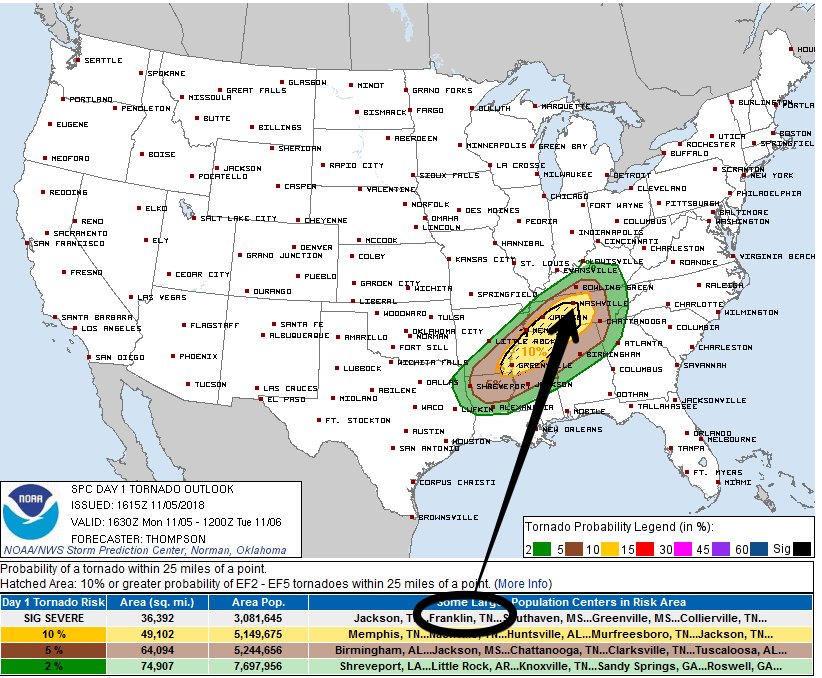 Not expecting hail today. But if you hear hail, watch out, because it’ll indicate an organized storm with some bad wind close by.

Why The Storms May Not Be So Bad

In a phrase: “insufficient CAPE.”

For damaging winds to descend and tornadoes to form, there has to be at least some CAPE — Convective Available Potential Energy.

If making a storm is like making an omelette, CAPE is the egg. You can have a chef, some ham, appropriate cheese, a skillet, a functioning stove, a mixing bowl with a Brand New Spatula, and the motivation to whip up that omelette, but if you don’t have egg — or you have very little egg — you’re not making much of an omelette.

Tonight we will have all the other ingredients for a well-constructed omelette, we just aren’t sure if there will be enough egg to make one.

The HRRR model shows no CAPE at 6 PM tonight, then, over the next six hours, it thinks CAPE will get pulled in from the south to fuel these storms and make that omelette.

I’ve heard that before.

One way to prevent CAPE from arriving is for rain to form early tonight and consume the CAPE the storm line will need for big storms later tonight. Therefore, we are in favor of rain coming before the storms. Not sure we’ll get that early evening rain, but I’m pulling pretty hard for it.

There also may not be enough time for sufficient CAPE to arrive by the time the big storm line gets here. To return to the omelette analogy, you need enough egg whites and/or yolk to make the omelette, without it the omelette won’t come together. A little CAPE just isn’t going to do the job. Wind energy and shear aloft will be so powerful, we’re going to need more than a little CAPE to build the storms. If it’s just a little CAPE, the cloud updrafts will get sheared apart by powerful winds blowing overhead.

If you only think in song — I apologize in advance — for this misheard lyric:

CAPE remains the biggest wild card. One way to track the CAPE is to look at our dewpoints, which is a big part of the CAPE equation. The models that think our CAPE will be high enough to support severe storms all think we will have a dewpoint in the mid 60°s when the storms get here; as I write this, BNA’s last reported dewpoint was 55°. The dewpoint has a long way to go, and a short time to get here.

A 10° rise in dewpoint over 6-8 hours isn’t unprecedented, but it’s kinda hard to believe it’ll happen that fast. This will be closely watched. If that dewpoint doesn’t at least get to 60° before this storm hits, this whole event likely will be nothing but a bunch of rain and some wind.

All that said, if this comes together (and it might all come together), you need to be in a safe place. Resist any urge to go outside and try to “see” it because you won’t be able to see anything other than darkness and rain.

Strong/Severe storms or not, heavy rain is on the way.

Flash flooding is possible. The Weather Prediction Center says the odds of a flash flood event are between 10% and 20%.

Rain and storms should depart shortly after midnight.

In my view the Responsible Citizen Does Four Things During Severe Weather Season. Right now we’re in the third category. As for the fourth category — note no warnings are ever posted to this website, although we do post them to Twitter.

If we get a warning, Andrew will be on Periscope. Will will be looking for your #tSpotter reports of damage or other weather shenanigans. I’ll be tweeting like crazy on Twitter.