It’s going to get breezy this afternoon, even windy, with gusts up to 25 MPH.

Afternoon rain is expected. It should cross the Tennessee River around lunchtime and arrive here around late afternoon, aka, around the time it’s getting dark. The HRRR model illustrates:

Because showing your work is important, let me toss some science at you.

Speaking generally about a very large outlooked-for-severe-weather area, this morning the Storm Prediction Center wrote that:

Impressive wind profiles with large 0-1 km hodographs and intense mid-upper jet should foster organized storms including embedded bowing segments and supercells with low-level mesocyclones capable of mainly damaging wind and tornadoes, though some hail will also be possible. A moderate risk upgrade might be warranted for a portion of this region in later outlooks.

NWS-Nashville, writing about Middle Tennessee and not the entire area:

Models are in pretty good agreement that mid 60 dew points will be pulled as far north as our northern border just ahead of the cold front the surface low will be dragging. The tongue of rich, Gulf moisture will support enough destabilization to achieve between 250-500 J/kg of mixed layer CAPE despite the nocturnal timing.

A 50-65 kt low level jet will ramp up ahead of the cold front leading to 40 kts of 0-1 km shear and 45-50 kts of 0-3 km shear. The severe threat will be in the form of a QLCS capable of damaging straight line winds and a few tornadoes. I don`t expect much in the way of hail given poor lapse rates.

Thus we have what we need to make big storms generally speaking, and in our region.

Here are our hazard levels:

Before I get to probabilities, do not miss this caveat:

Despite the overlap of impressive shear and modest instability, this is not a slam dunk event. Models are hinting at a shield of showers ahead of the main line of storms. This could slowly gobble up the limited CAPE and limit the severity of storms along the front in our area.

If light rain comes before the “main event” tomorrow night and uses up all our CAPE, that would be excellent. It would be like the Severe Storm Hamburglar burgling your storm burger, kinda like this:

The Avocado Outlook of Storm Probabilities

Probabilities remain the same as they were yesterday, but with one important change.

The probability of a severe weather event (wind and/or tornado and/or hail) happening within 25 miles of you is 30%. 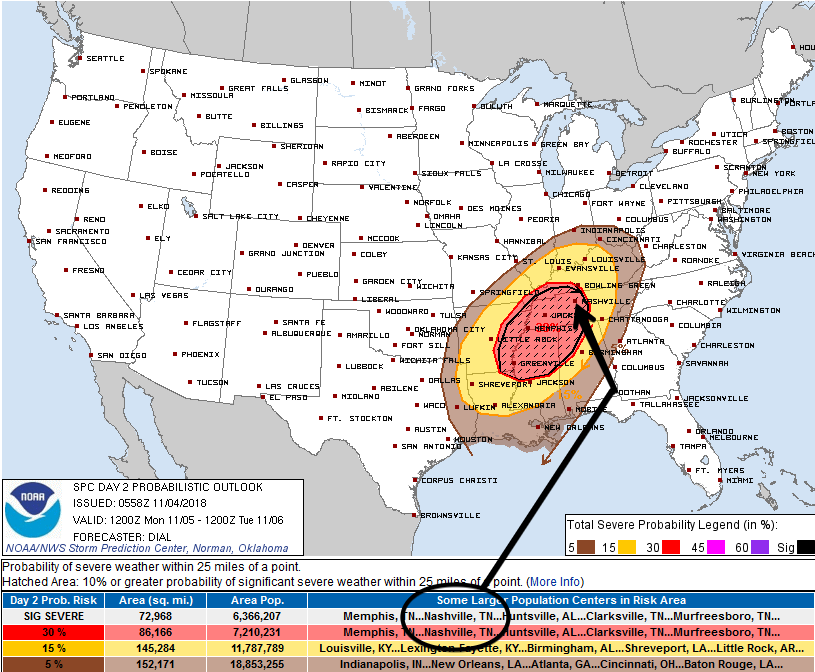 These probabilities will be updated several times. We will bring you those updates either here or on Twitter, which you can find here or, by scrolling down, here.

Same as yesterday for the severe stuff. ETA is Monday night at midnight, plus or minus a few hours. From NWS-Nashville’s discussion:

The I-65 corridor`s window appears to be at the earliest around 11 PM to 2 AM.

And here’s their graphic: 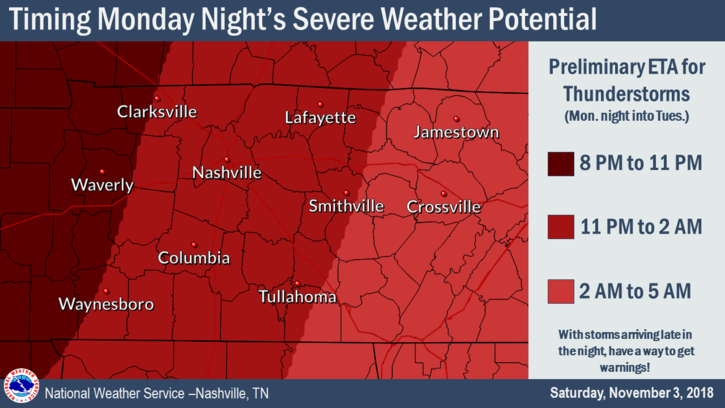 Let’s hope for rain before that, burgling all our instability and causing the severe setup here to fall apart.

Nope. Be prepared, stay informed, it’s likely nothing will happen to you. You will probably be fine. But you should be ready and respect these storm systems.

Severe weather is a low probability, high impact event. The probability any of this will happen to you is low, but if it does the impact could be minor, moderate, or even life-threatening. Reasonable safety steps dramatically reduce your risk of injury.

In my view the Responsible Citizen Does Four Things During Severe Weather Season. Right now we’re in the second category.

(4)  Warning Issued — Immediate Action: A Warning is issued. Unfortunately, the low probability of a warning happening to you happened. Time to take action. You planned. You were ready for it. The bad stuff in the storm won’t hit everyone in the warning area, but everyone in the area is too close to occurring and imminent severe weather to ignore. Time to shelter.

Next weekend we will likely be dealing with a freeze in most locations, if not a hard freeze.