Damaging Wind/Tornado Threat Monday Night. ETAs & Probabilities. And Why “this is not a slam dunk event.”

(If you read our forecast this morning, the new information on tomorrow night’s severe storm threat is in blue).

This rain should hang around until early/mid evening. No lightning or storm concerns tonight.

This afternoon, the Storm Prediction Center wrote that:

Both damaging winds and tornadoes will be possible, with tornado potential more heavily weighted toward areas with warmer, more unstable air from northern MS across middle TN and perhaps southern KY and northwest AL. A strong tornado cannot be ruled out, with effective SRH potentially to 500 m2/s2.

Thus we have what we need to make big storms generally speaking, and in our region.

Here are our hazard levels:

Despite the overlap of impressive shear and modest instability, this is not a slam dunk event. Pre-frontal convection could interfere with available instability. Also, the shear to instability ratio may be too great. But, if deep updrafts flourish, they will easily rotate, and low level Storm Relative Helicity will be supportive of tornadogenesis.

Let’s unpack all this.

The bad stuff is supposed to hit around midnight, plus or minus a few hours (more on this below).

We hope it rains early Monday night before the bad stuff is supposed to hit. This early evening rain is what is meant by “pre-frontal convection.” We want it because it would use up all our CAPE, and limit or altogether eliminate severe storm chances.

Early evening rain would be like a Severe Storm Hamburglar burgling your storm burger, kinda like this:

The HRRR model is already advertising this “pre-frontal convection” (see below) in the form of light rain arriving around 6 PM. A great sign!

Not all models agree.

The Euro model doesn’t have much rain early tomorrow night, which is a bad sign because it would make severe storms arriving closer to midnight more likely.

The NAM3 model predicts a messy radar, with rain arriving around 7 PM to 8 PM, which is kinda what we want (see below):

it is encouraging to see pre-frontal convection on some of these models, and the corresponding reduction of CAPE.

Also mentioned by NWS-Nashville as a potential reason severe weather may not happen here is an unfavorable shear to instability ratio. Even if we have a little CAPE, there may be so much wind shear aloft that any weak updraft gets blown apart by those intense winds aloft, kinda like the way you might destroy the top of a tower of bubblebath bubbles by blowing on it.

For all these reasons the probabilities are where they are.

The Avocado Outlook of Storm Probabilities

The probability of a severe weather event (wind and/or tornado and/or hail) happening within 25 miles of you remains 30%. 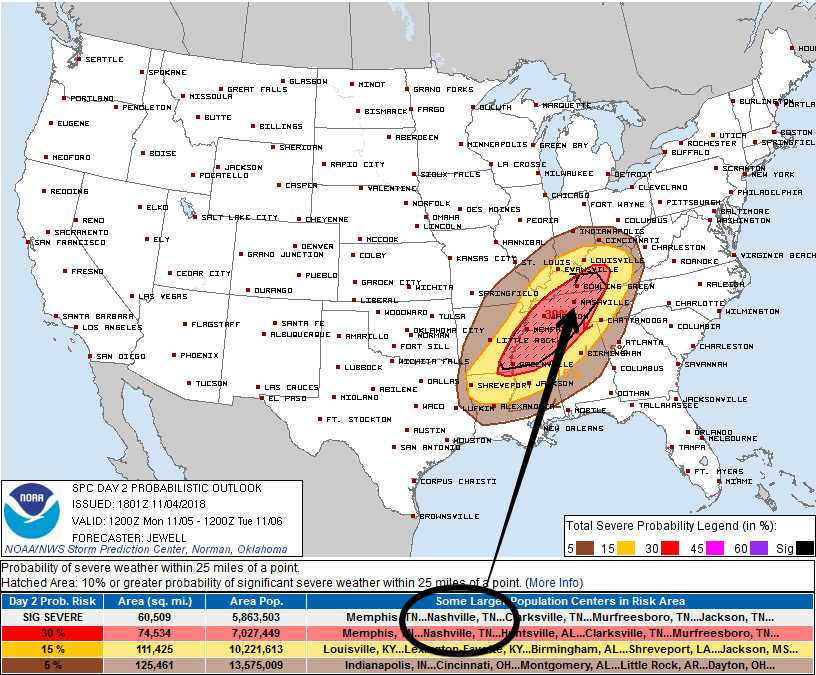 To look at it another way, there is a 70% chance a severe weather event will not occur within 25 miles of you tomorrow night. This threat is conditional. Remember this quote-o-caution from NWS-Nashville, above:

But, if deep updrafts flourish, they will easily rotate, and low level Storm Relative Helicity will be supportive of tornadogenesis.

These probabilities will be updated several times. We will bring you those updates either here or on Twitter, which you can find here or, by scrolling down, here.

Same as yesterday for the severe stuff. ETA is Monday night at midnight, plus or minus a few hours. From NWS-Nashville’s discussion:

The I-65 corridor`s window appears to be at the earliest around 11 PM to 2 AM.

And here’s their graphic: 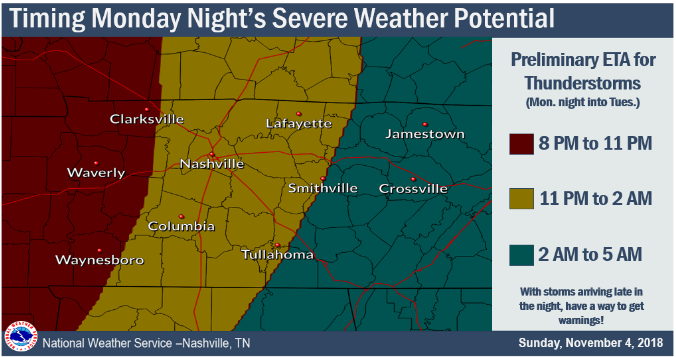 Let’s hope for rain before that, burgling all our instability and causing the severe setup here to fall apart.

Nope. Be prepared, stay informed, it’s likely nothing will happen to you. You will probably be fine. But you should be ready and respect these storm systems.

Severe weather is a low probability, high impact event. The probability any of this will happen to you is low, but if it does the impact could be minor, moderate, or even life-threatening. Reasonable safety steps dramatically reduce your risk of injury.

In my view the Responsible Citizen Does Four Things During Severe Weather Season. Right now we’re in the second category.

Weekend highs only in the 50°s.