(If you read this morning’s blog, the text in blue is new)

Saturday was our last day of regular daylight because:

Rain should enter Memphis in the morning then work its way east.

ETA here mid-afternoon, aka “near dark.”

Monday afternoon it’s going to get unseasonably humid (dewpoints in the low 60°s) and breezy. After dark it’ll get windy (gusts to 34 MPH). You’ll think ruh-roh, it’s November, something is up. And you’d be right.

The NAM3 model has ETA 11 PM Monday into 2 AM Tuesday.

The Euro agrees with an ETA around midnight, give or take a few hours.

ETAs will require constant adjustment and updates. So will the forecast in general. Stay connected!

Note the language used: “potential.” Let’s not get carried away.

Mixed storm modes including a squall line and supercells are likely to develop along and ahead of advancing cold front Monday afternoon initially over the lower MS Valley, and continuing east into the TN Valley and Southeast States Monday night.

Two rounds of storms are possible. The first round — supercells — are less likely, but also usually more dangerous. The second round — a line of heavy rain and storms — is more likely, and can be dangerous, but aren’t as concerning (in my view, anyway) as supercells.

Impressive wind profiles with large hodographs and an intense upper jet will promote a threat for mainly damaging wind and tornadoes, though some hail will also be possible.

Meteorologists use a chart called a hodograph to visualize wind speed and direction. When a hodograph is large and curved the right way, it means there’s plenty of rotation and shear present, a necessary ingredient for severe storms, including tornadoes. As you just read, weather models for Monday night depict a large (and curved) hodograph. Therefore, damaging winds are the main concern, followed by tornadoes, then hail.

The NAM3 model has sampled (barely) the ETA of the line, but it has a pretty mild Significant Tornado Parameter score for us, a good sign for us: 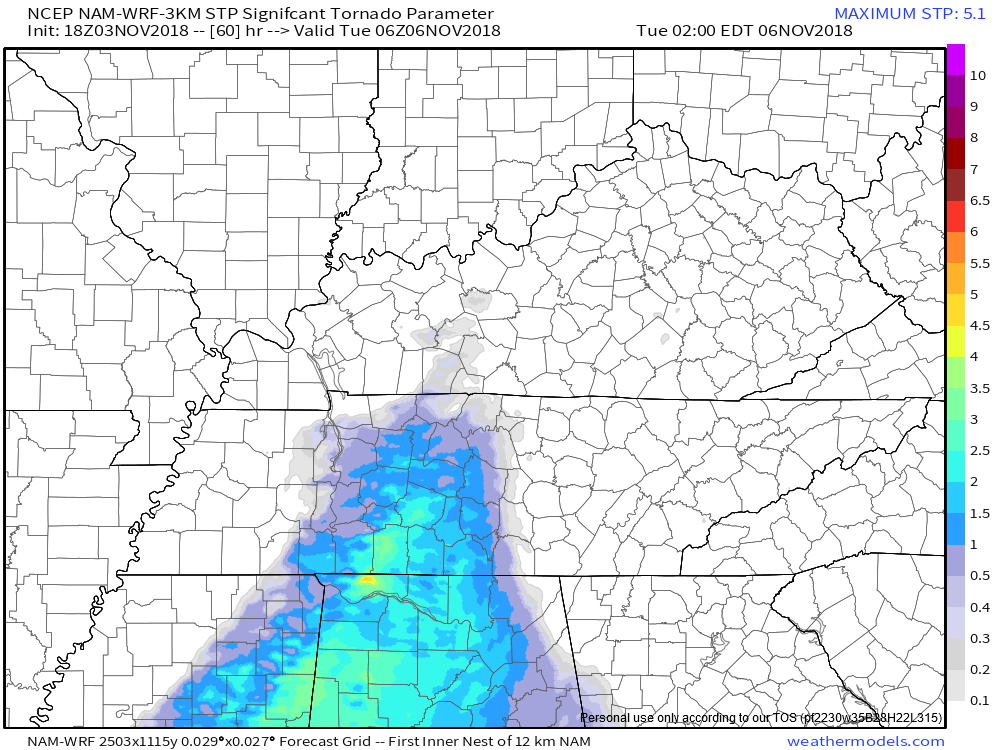 However, if you look behind the NAM3 model at the forecast sounding, yikes. The circled numbers = Do. Not. Want. 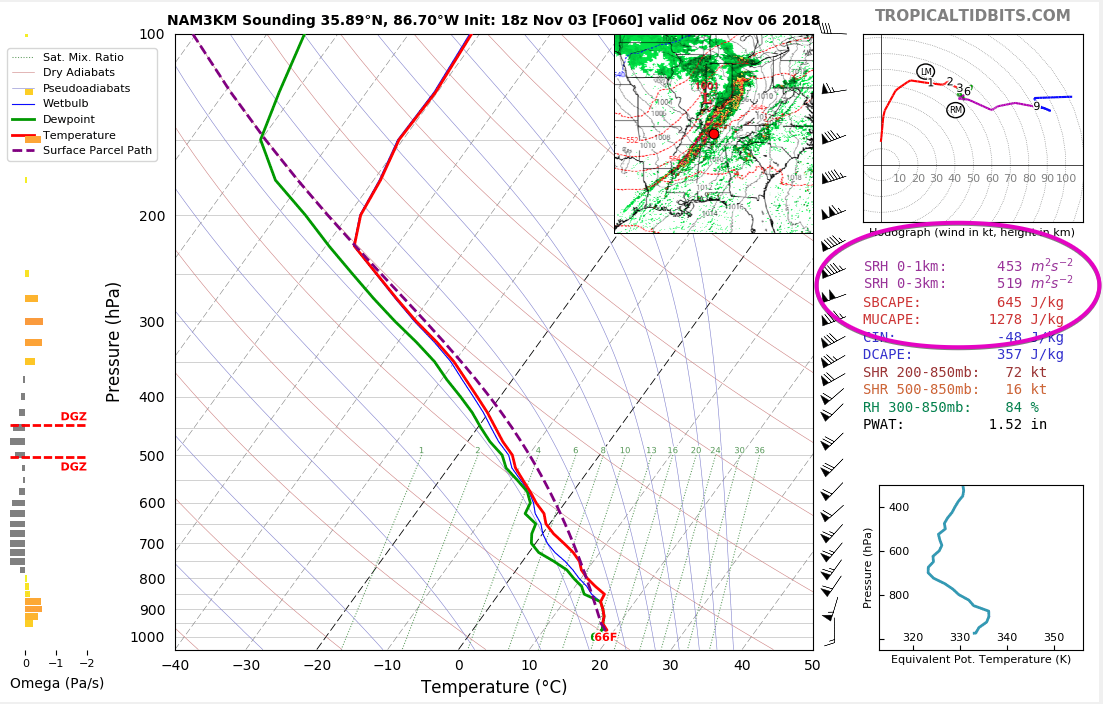 Same is true for the GFS model forecast sounding. We don’t want the atmosphere doing this, either: 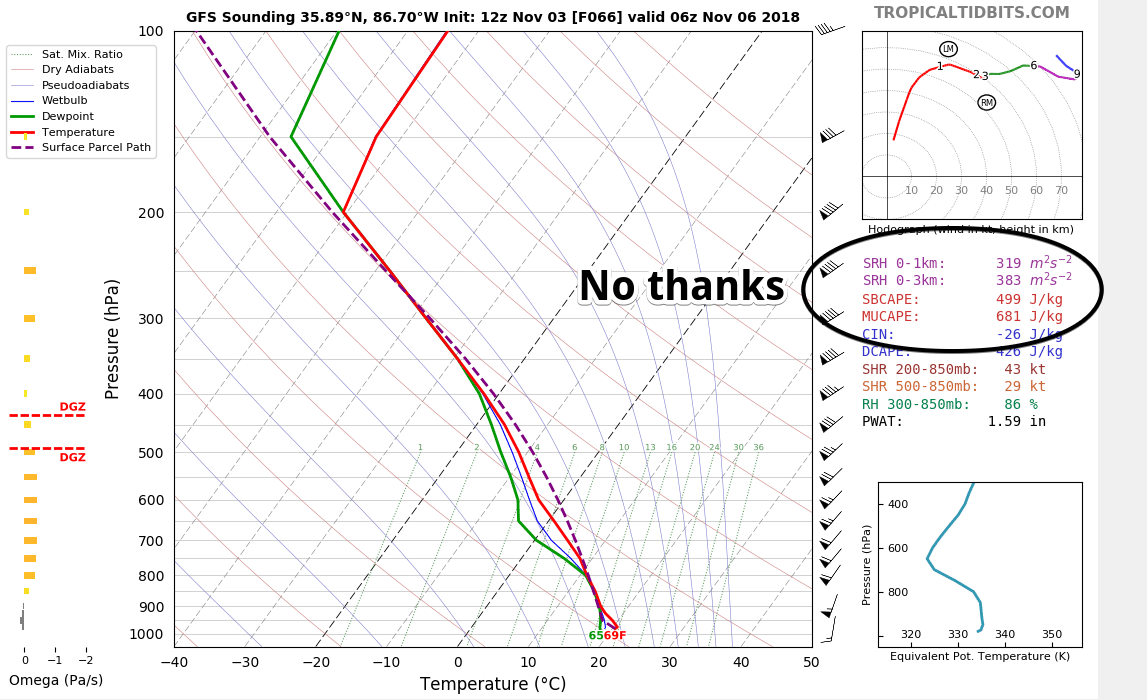 This has my attention.

Right now this is a “regional” concern, which is to say no data is reliable or high-res enough to provide local specifics. As the event nears more specific and local information becomes available. So for now, the best way to assess risk is to examine probabilities from the Storm Prediction Center.

We are in an “Enhanced Risk,” which is on the higher side of ruh-roh-ness from the SPC for an event three days away. 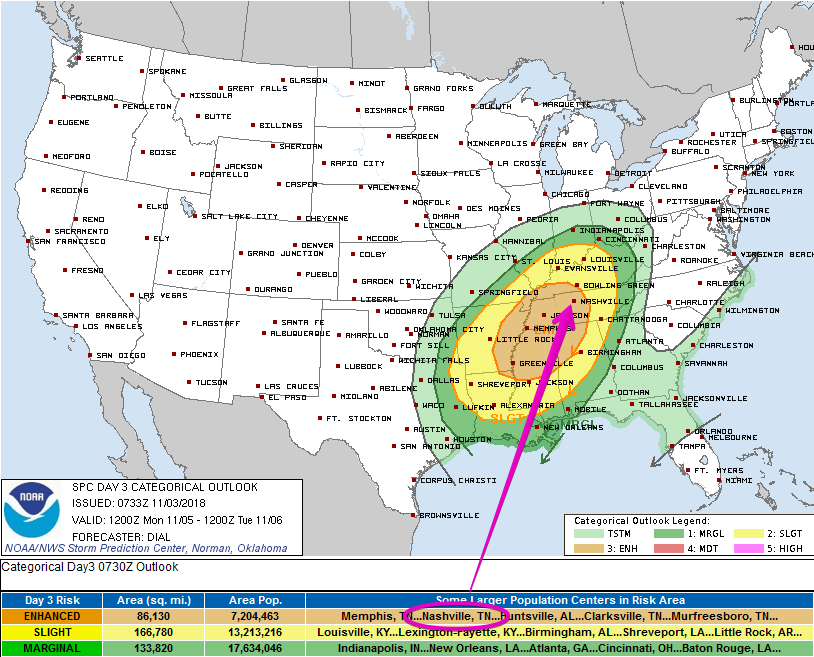 Three days away, this risk is here on the SPC scale: 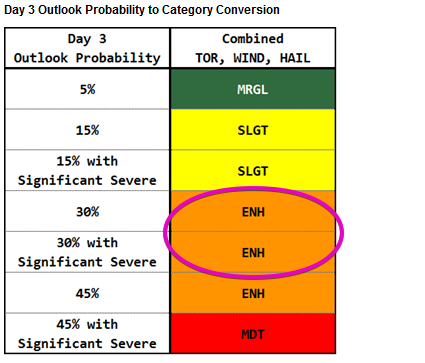 The companion SPC map below lays out the probabilities: 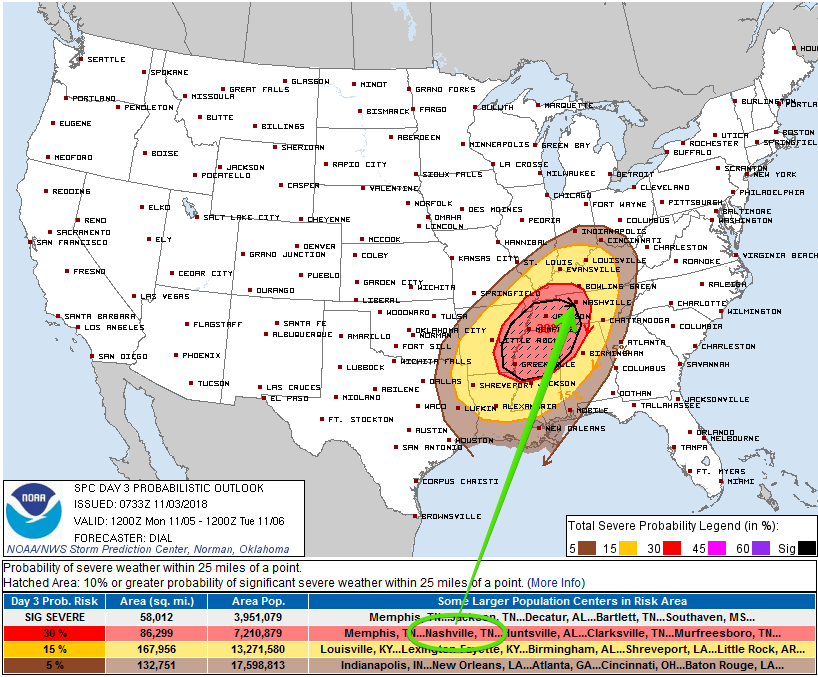 Our inclusion in the red-shaded area means SPC thinks the probability of a severe weather event (wind and/or tornado and/or hail) happening within 25 miles of you is 30%.

These probabilities will be updated several times. The next update arrives while we sleep overnight tonight. 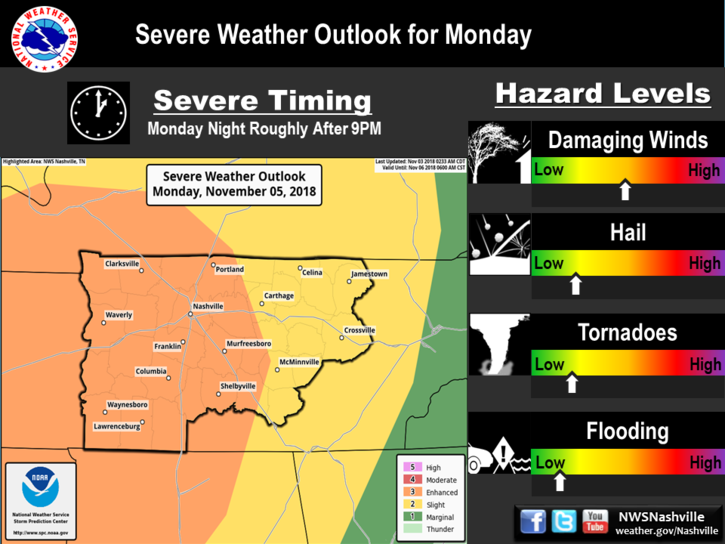 Could this forecast “bust” and nothing bad happen? Yes! There are several ways that could happen. The usual way a forecast like this busts is by a lack of instability in the atmosphere. Right now, all weather models think we’ll have enough instability to cause problems.

Forecast “busts” have been common recently. The past few “Moderate Risks” (a 4 on a scale 0 to 5) were total non-events. We hope this repeats that. However, all model data thinks there will be enough instability to supply storms needed energy to go severe. We should not allow recency bias to disrespect this system. Tornadoes can — and do — develop in Middle Tennessee in November. That this system is coming in at night (without daytime heating) should not be much of a factor. Cold season severe weather systems bring their own booze to the party.

What To Do Now

Clean out your safe space this weekend – just in case. Even if this event busts and nothing happens, another storm event may be shaping up late next week.

In a mobile or manufactured home? Know where you’ll go now, don’t leave it to the last minute.

Nope. Be prepared, stay informed, it’s more likely than not nothing will happen to you. You will probably be fine. But you should be ready and respect these storm systems.

Have a great weekend! Much more about this later today, Sunday, and Monday on Twitter and on this dot com.