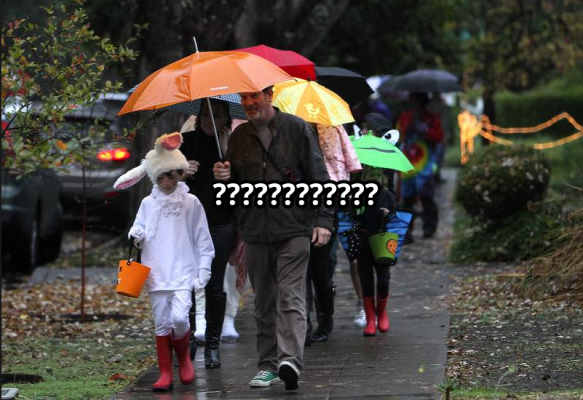 Monday and Tuesday will be great. Low 40°s early, warming to 66° Monday and 75° Tuesday. No rain either day. Tuesday night will be breezy and mild, a fact you may find important by the time you get to the bottom of this page. 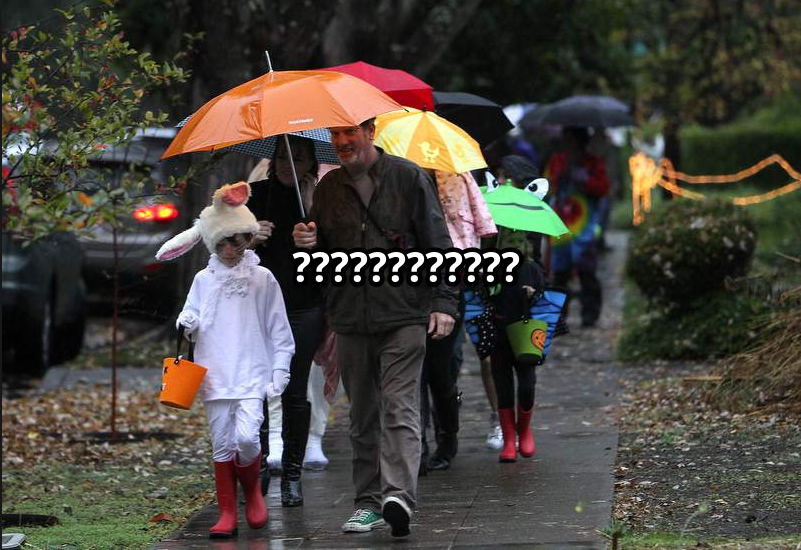 Look for a soaker of a system with rainfall amounts of anywhere from 2 inches along the Plateau, to as much as 4 inches for northwestern areas.

The question is “when exactly will it start?” Looks like once rain starts, the weather will go downhill. Wind will accompany the rain, making fun difficult.

As early as Wednesday morning. Or it may wait until after trick or treating ends. 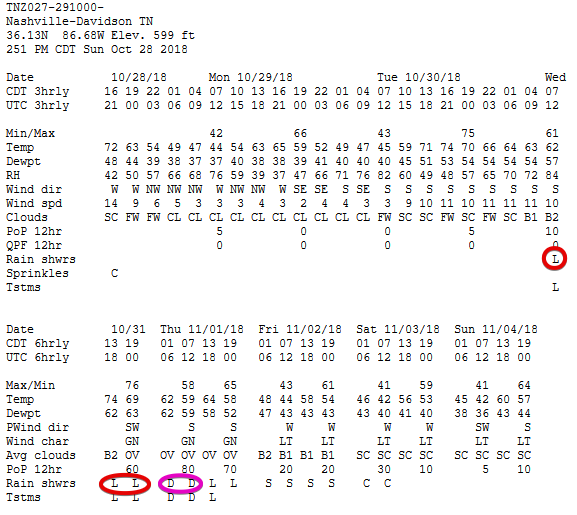 Stay with me, though.

Another way to assess this risk is to say there is a 40% chance of no rain during trick or treating.

The last two runs are is kinda encouraging. I’m only showing the latest run below. 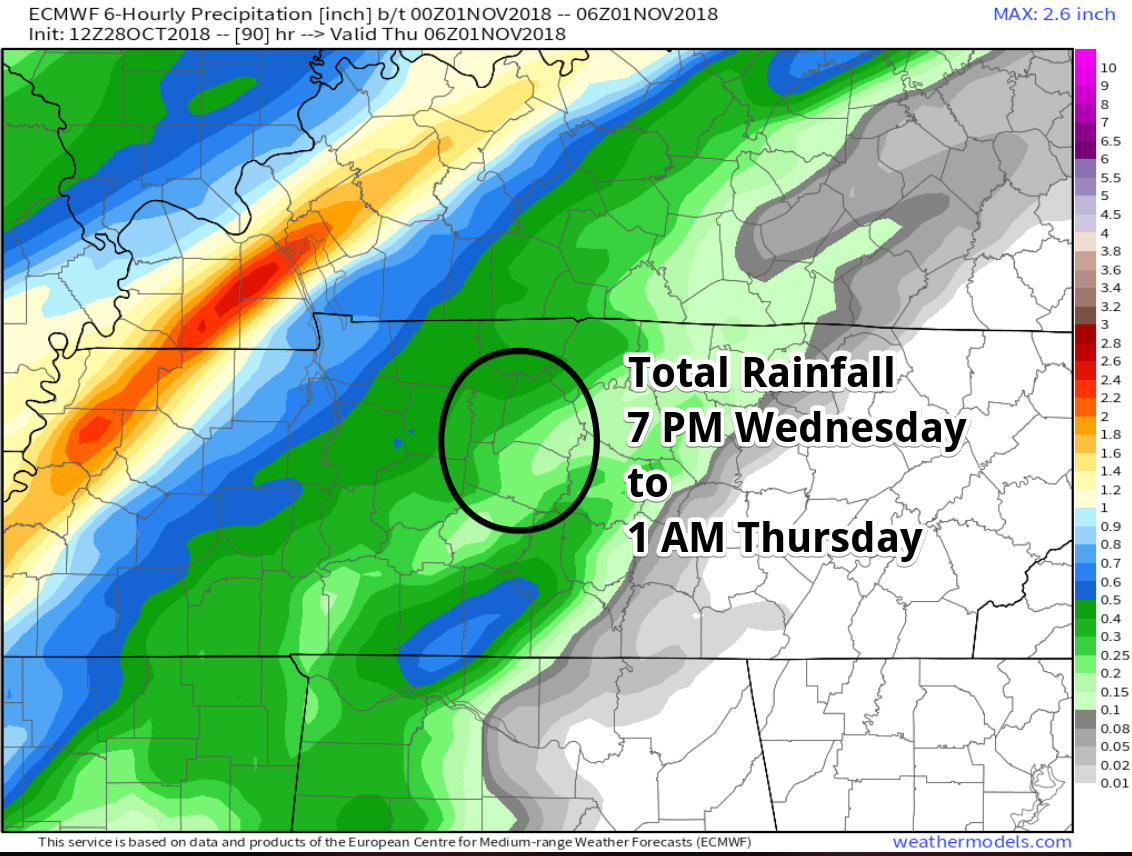 This shows only a little rainfall occurring at any time between 7 PM and 1 AM. It could arrive after Free Candy Hours end;’ in fact, I think that’s what it’s trying to say. It does not think it’ll start Wednesday morning or Wednesday afternoon.

I threw out the 18z run because I want to preserve some dignity. The 12z run is solid for the GFS model, the C+ student of the model world.

This 12z GFS model run thinks rain will start late Wednesday morning, linger into the afternoon, then rain out Free Candy Hours. Below is the Wednesday 7 PM to Thursday 1 AM time frame. 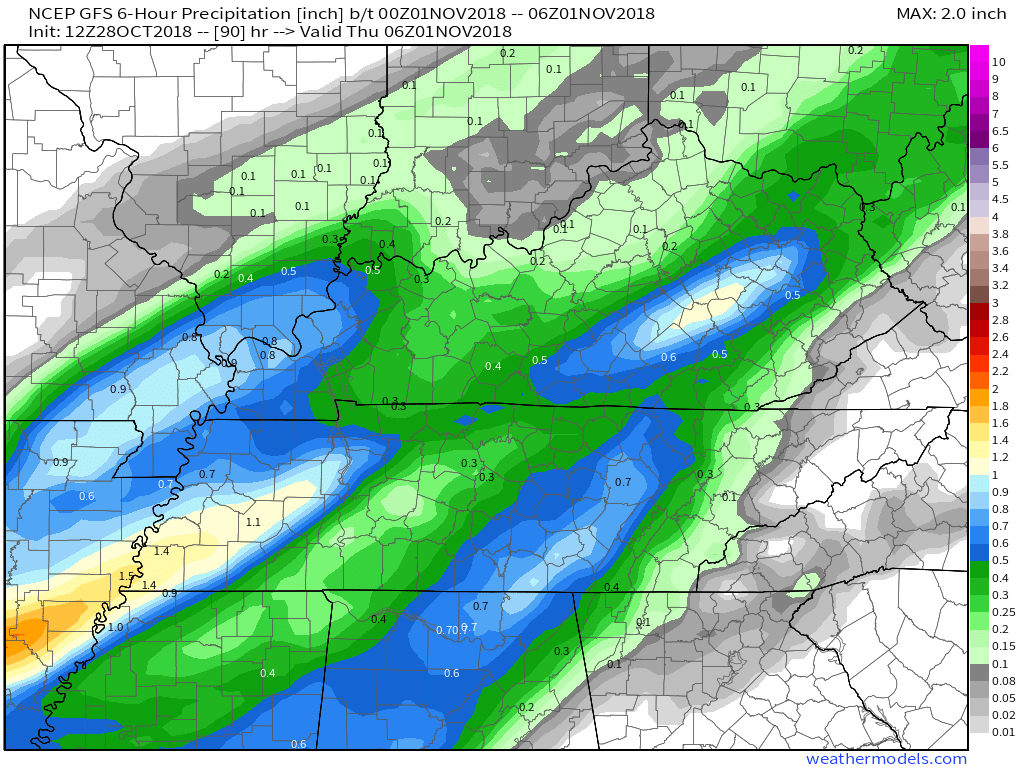 The NAM12 model has light rain Wednesday around 7 PM, with the heavy stuff arriving after midnight: 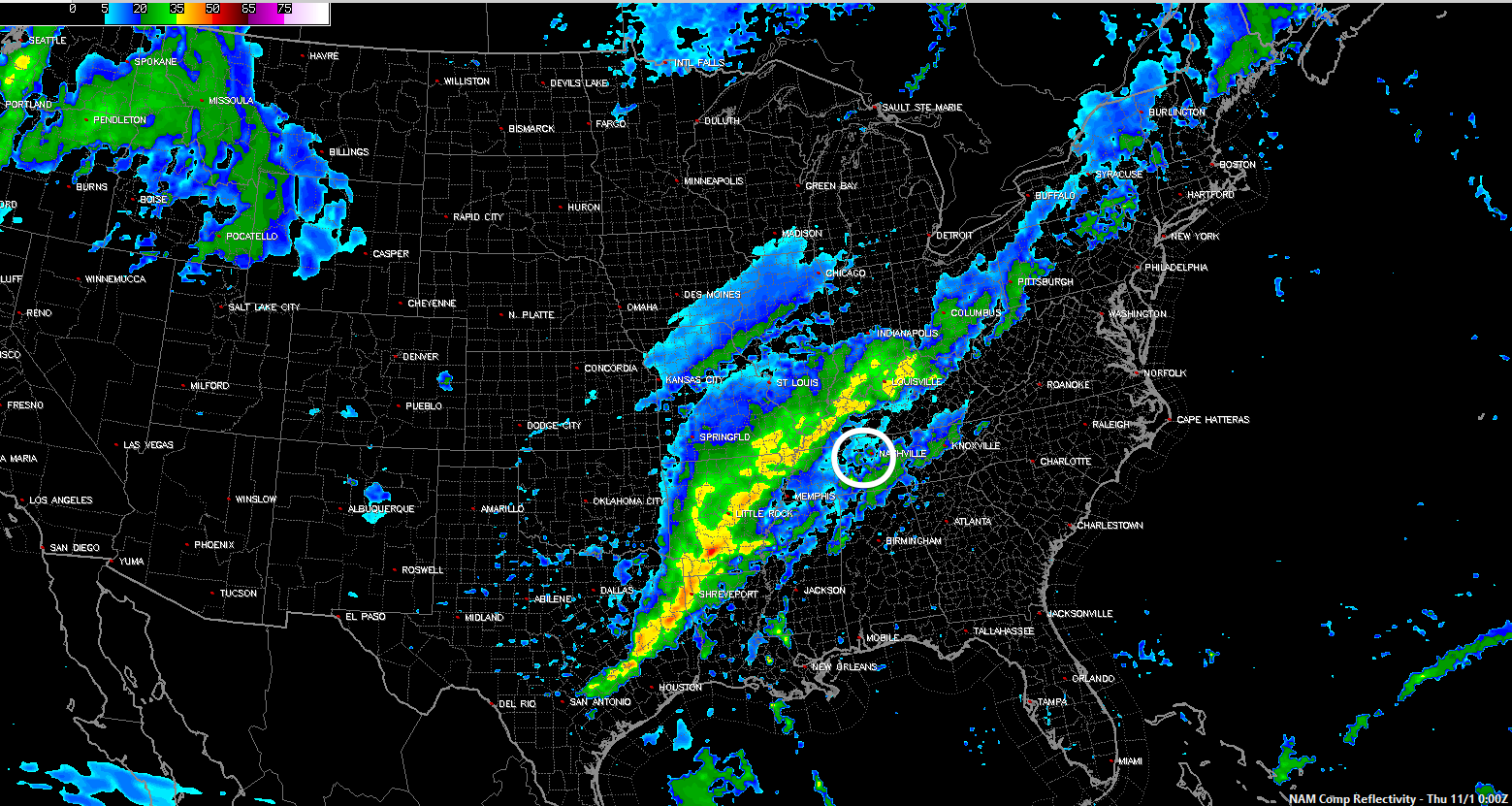 The regional, higher resolution models are still out of range. For example, the NAM3 model only runs out to midnight Tuesday night. It’s below: there’s the rain in central Missouri and Illinois, making a slow march our way during the day Wednesday: 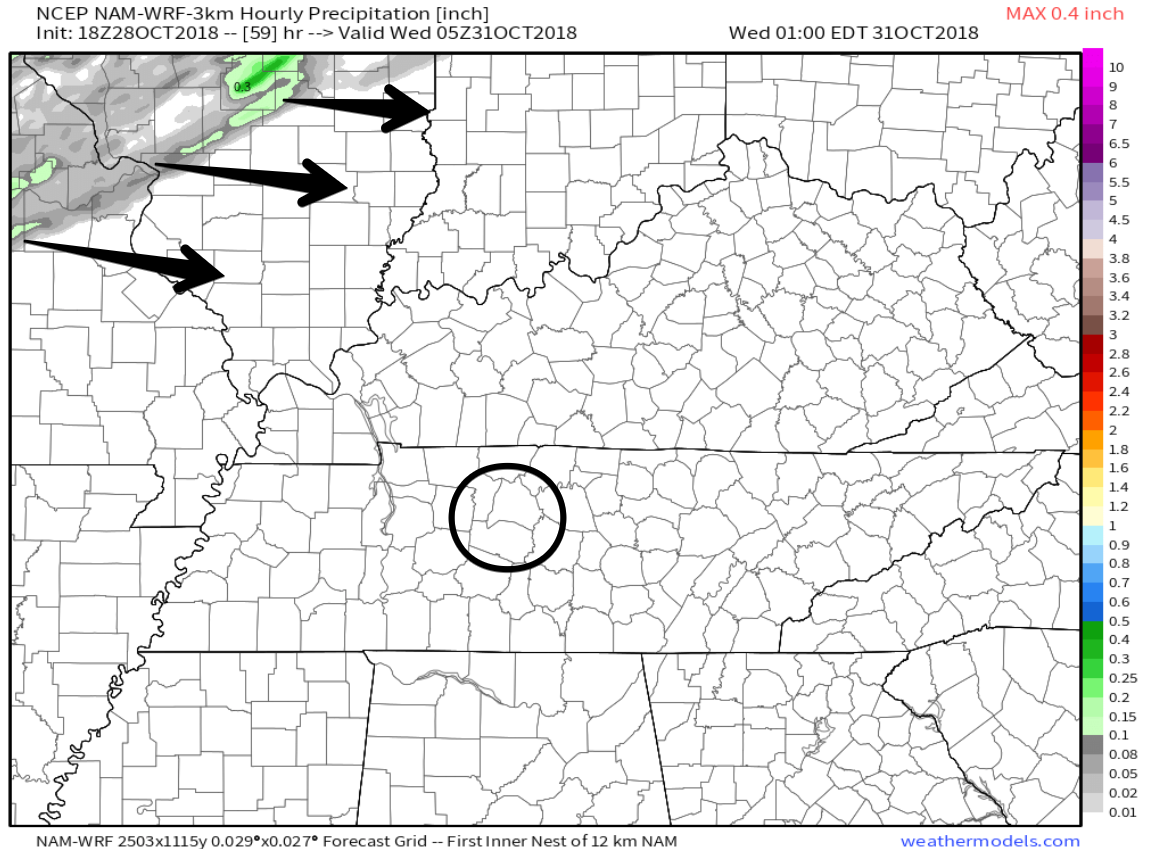 If I was in charge of telling people when to trick or treat, my advice is WAIT. 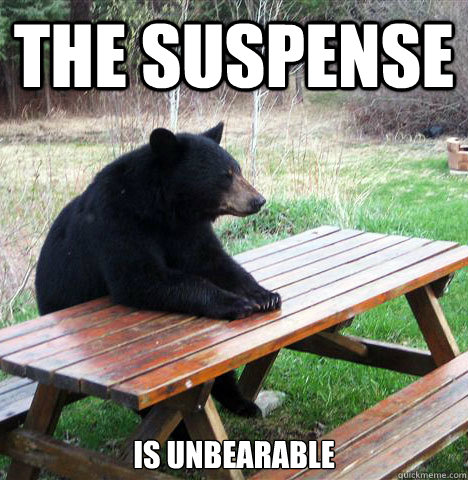 Don’t decide tonight. Wait until Monday night when the NAM3 and other regional models get into range. My gut is that the Euro is right and the rain may hold off.

It’s Going to be a Lot of Rain

2″ to 4″, mostly falling overnight Wednesday through Thursday morning. At some point the rain will be torrential, and may cause localized flooding.

And it May Storm

A big storm is more likely if the rain gets here early and the system has some daytime heating to feed it. The risk is mostly northwest of us and confined to late afternoon. Not really a deal for us.

However, a lower, secondary storm risk exists later Wednesday night, when strong winds accompany heavy rain into the wee hours of Thursday morning. The wind energy may be substantial as seen below by NAM12 model helicity values: 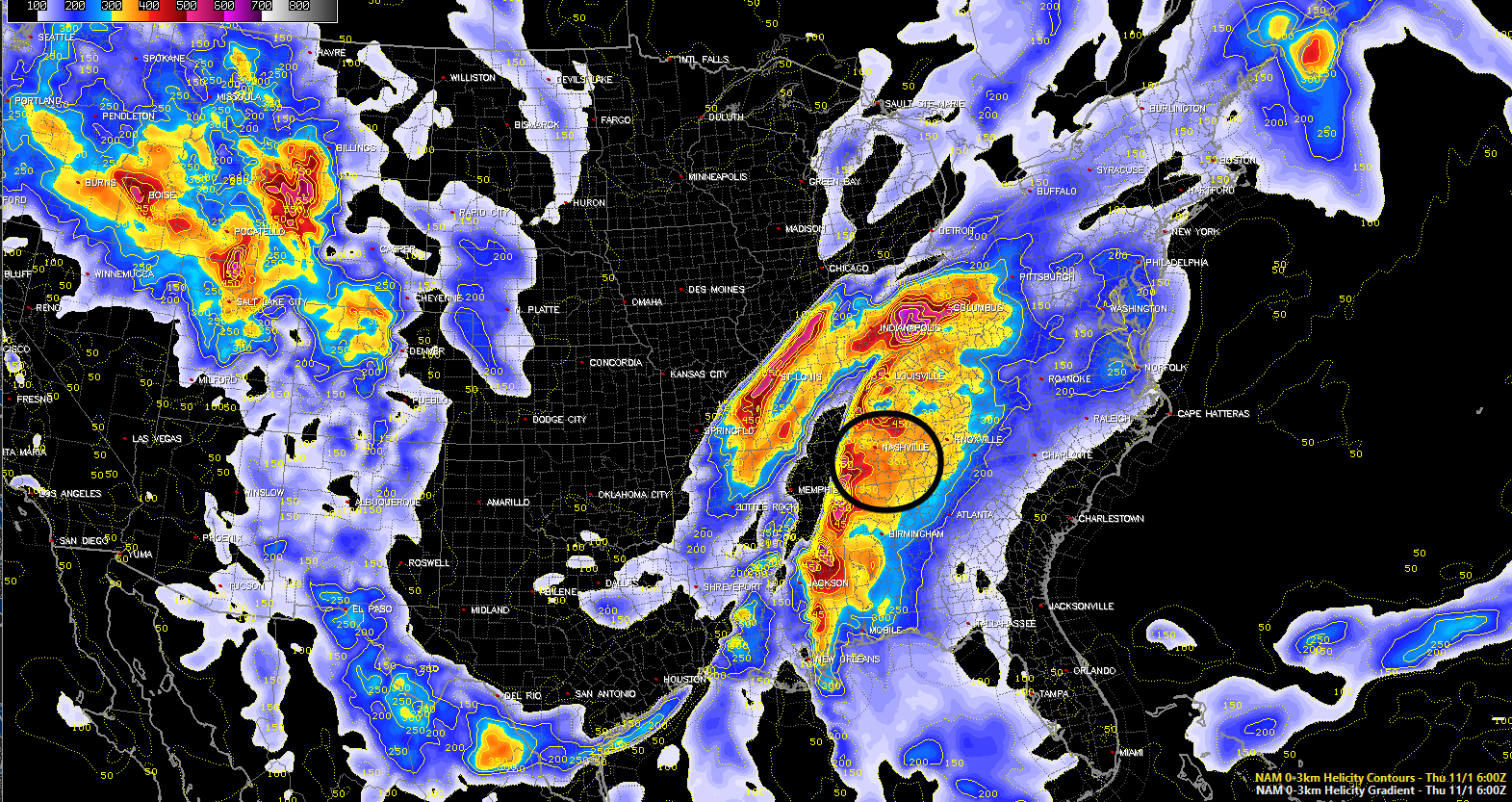 A frustrating “high shear/low CAPE” event is shaping up. It’s frustrating because high shear/low CAPE events can turn into nothing worse than sounding your wind chimes, and on rare occasions they can be as bad as spinning up tornadoes. Will all depend on how much instability the system can tap; however, this does not look like a tornado event to anyone right now. We are not even outlooked for severe weather by the Storm Prediction Center. If you have storm anxiety, this does not look like anything to worry about.  I’m really looking forward to seeing what the regional models think this time tomorrow night, to see if that may change the forecast a little.

Rain should end by mid-to-late day Thursday. No sense speculating when it’ll end given uncertainty about when it will start.

The weekend looks pretty nice. Behind Thursday’s rain temps will drop back into morning lows around 40°s, highs around 60°.