At sunrise, Tropical Depression Florence was centered in South Carolina with maximum sustained winds of 35 MPH. Its western edge extends into Nashville and Williamson County.

Today Florence should weaken more and hopefully Finally Move. It’s forecast to move north of Atlanta then north over East Tennessee today. We’ll be on its weaker west side, bringing us more clouds, winds, and possibly rain. The official forecast track: 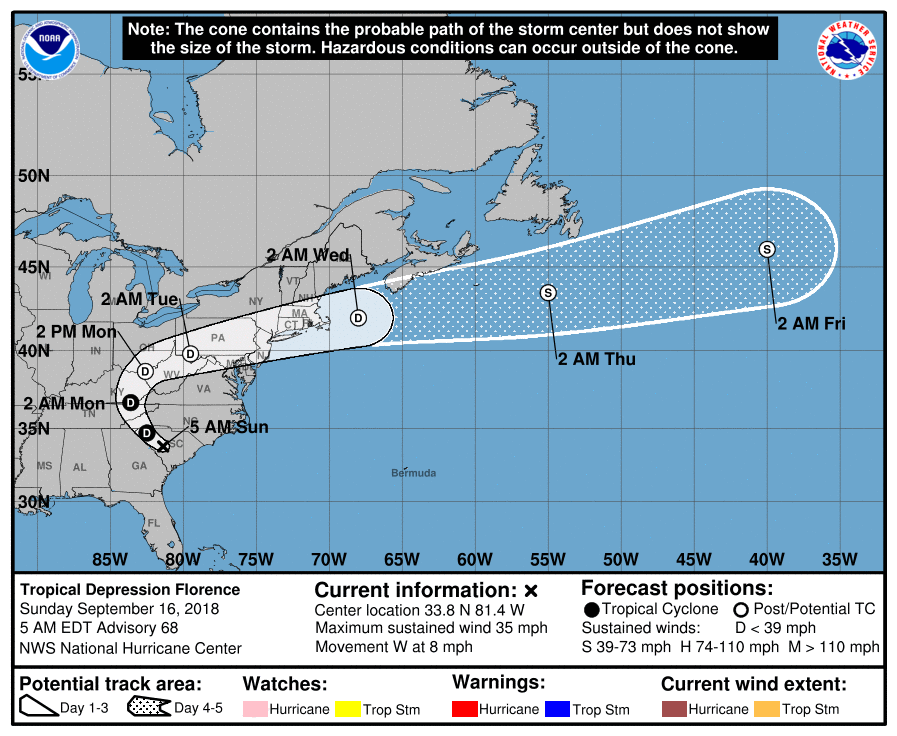 Florence should bring us light and scattered rain, unlikely to rain anything out. Under 0.10″ or so on average for this afternoon and early evening. I don’t think we will all get rain.

A thunderstorm is possible, but not expected. Here’s how NWS-Nashville described it:

Scattered to numerous showers and isolated thunderstorms will spread westward across about the eastern two-thirds of the Mid-State today, and can`t rule out some isolated thunder even along the Tennessee River by later this afternoon.

We are in the “eastern two-thirds of the Mid State,” so Titans fans should Pack a Poncho and, yes, be prepared for the low possibility of a lightning delay. I think lightning is really unlikely; instability looks poor and the K index is weak.

Cloud cover should hold high temps down into the mid 80°s. Humidity will remain high.

North/Northeast winds blowing 10 to 15 MPH will be common this afternoon, with a few 25 mph gusts. Winds may turn a bit NE, creating a bit of a challenge for the Texans punter.

This should continue through Monday morning. Florence departs our area Monday afternoon. Total Florence-related rainfall should be under 0.25″.

Florence’s cloud cover will keep us in the low/mid 80°s today and Monday, though still humid.

High pressure will build and heat us back up this week, with low/no rain chances:

Significant uncertainty remains about the coming weekend. A few days ago models predicted a cold front would show up Friday, bringing rain. Models yesterday pushed it back to Saturday and weakened it, meaning the cold front looked less and less like the Humidity Removing Hero Cold Front we all want wanted, and more like a sagging, off/on rainmaker that didn’t cool us off. Today the front continues to look weak, sagging our way sometime next weekend, maybe late in the weekend, but now it’s no longer the cold front predicted a few days ago.

Five day forecasts still aren’t very good. Draw few conclusions. All that said, the latest runs of the Euro model show very little rainfall here next weekend, with the potential for a scattered shower/downpour/thunderstorm. The GFS model shows a bit more rain popping up, but it is not that much more different than the Euro model.

In other words, a regular mid/late September weekend in Nashville.