Watching Florence, Temperatures on the Rise

High temperatures are going to jump back into the 80s today. Those 70s as highs are over… for now.

Humidity will remain on the noticeable side, especially in the afternoon hours. Dew points will remain below 70, however.

An isolated shower is not ruled out of the question for the day. Keep an umbrella handy just in case. This morning’s run of the HRRR model shows just that. Don’t focus on where is depicts the showers, just notice that they are there. Models can not predict the location of any of these pulse showers and storms with any accuracy.

Thursday, Friday, and the Weekend

I am going to go ahead and apologize for when you step outside tomorrow morning. Dew points will be at or near 70º with morning lows near 70º as well.

Only a slight chance of rain will be in the forecast for tomorrow with none this weekend. High temperatures will be near 90º through Sunday with dew points flirting near 70º.

So, basically summer without the showers and storms.

Hurricane Florence is still a Category 4 major hurricane with max sustained wind of 130 mph as of 8 AM. 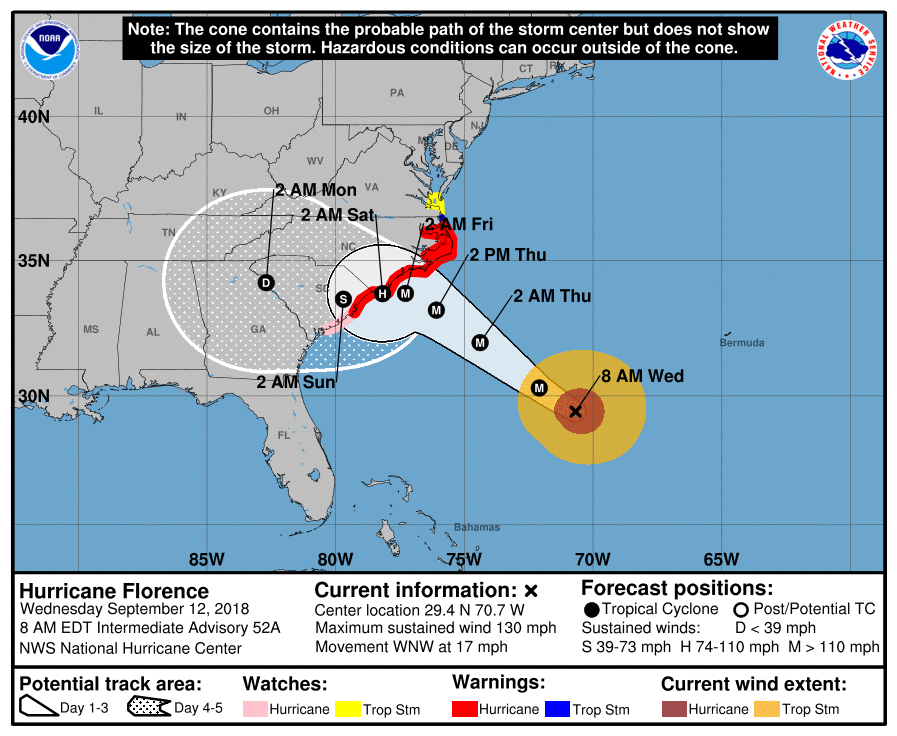 Landfall is coming a little clearer as Florence appears to continue the WNW track it is on. The National Hurricane Center currently has it slated between the Myrtle Beach, SC Area and the Wilmington, NC area.

The most notable shift is the sudden turn towards the west shortly before landfall. This is good and bad. First, it is good because it gives Florence more time to weaken as it gets out of the Gulf Stream and before it gets on shore. The bad? This implicates more of the North and South Carolina coast for storm surge.

The ultimate question: Should my family leave? My advice: follow the direction of their emergency managers. If they say yes, then yes. If they say no, then no.

The latest thinking for Nashville? Here is some of the discussion from NWS Nashville this morning:

“Some of Florence`s showers and thunderstorms could work their way into at least eastern parts of the mid state region during the Sun thru Tue time frame. If the system tracks faster and further to the west than currently expected, agree that all of themid-state could see some scattered showers produced by Florence by then. Continue toagree also that given the current uncertainty in the forecast during those latter periods. So simply put, the forecast for the mid state Fri thru next Wed night will generally be partly cloudy to mostly cloudy skies with iso to sct showers and storms from Sunday onward to Tuesdsay across Nashville.”

Florence is a storm to be watched along the coast and here in middle Tennessee. As always, stay tuned for updated forecasts here and at @NashSevereWx on Twitter!