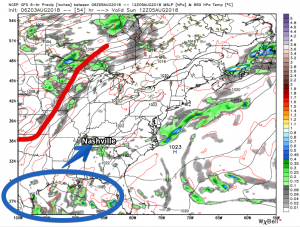 Temps and humidity will rise this afternoon. High today 91º, with dew points remaining in the mid to upper 60°s. That’s not oppressive humidity. Pretty much normal for early August.

This weekend will be hot, humid, and mostly dry.

Expect a slight chance of showers Sunday as an upper trough (red line, below) develops to our west, beginning to pump gulf moisture (blue circle) into the region.

Several large rainmaking weather features will be bumping into each other on their way here, so expect a persistent unsettled pattern next week. That’s weather-speak for “several possibilities, but like a dozen frogs in a bucket, we don’t know which will jump out first.”

Let’s leave it at this: expect a chance of showers and storms every day next week, with the best chances Wednesday and Thursday.

It could rain a lot. From NWS-Nashville:

As it is with summertime, some of the stronger showers and storms that do develop could bring brief heavy rainfall which could lead to localized minor flooding in some locations. However, as of this time, there is no indication of any widespread organized flooding potential. This reasoning is also supported by the latest WPC QPF forecasts. 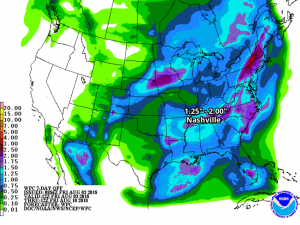 As it is with summertime also, some of the stronger storms that develop could reach strong, with a few storms here and there reaching severe thresholds, mainly during the mid to late afternoon into the early evening hours.

WPC thinks total rainfall up to 2″ is possible next week.

Stay tuned for updates on next week with our Twitter feed, @NashSevereWx!