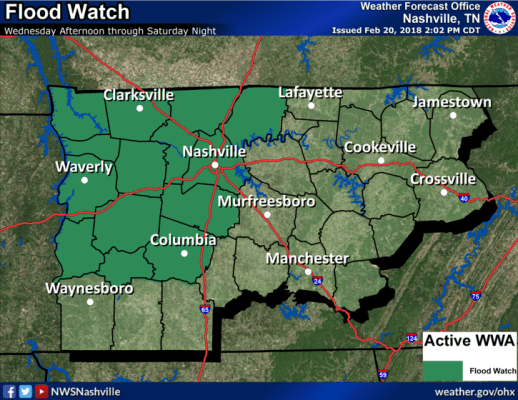 Rain showers are moving from southwest to northeast through the Mid-State this morning. A surface cold front is slowly meandering through north-central Tennessee, too. Temperatures will be several degrees cooler today, thanks to that and the addition of rainfall. A few thunderstorms are possible through the remainder of the day, but severe weather is not expected. 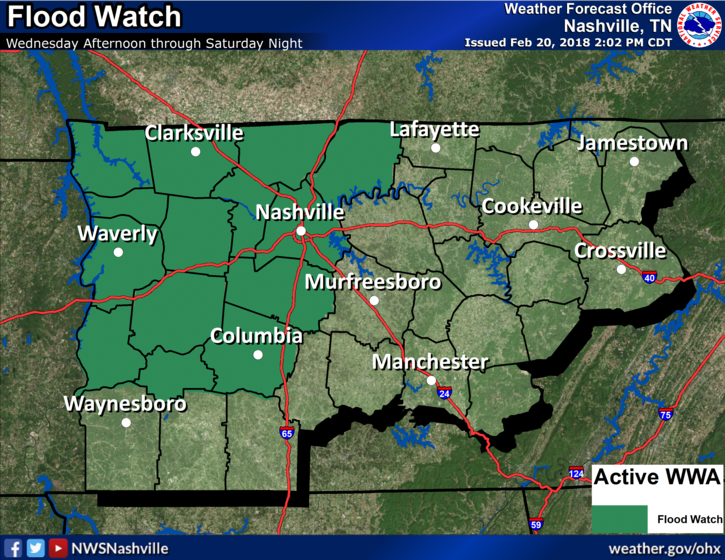 We still have two flood advisories out for the Stones and Cumberland Rivers.

We look to get a break sometime on Thursday night and early Friday before another round of heavy rain move back in Friday-Friday night, and a third round Saturday-Saturday night. Any flooding from today/tonight’s rain will be exacerbated from Friday/Saturday rainfall.

Editor’s Note/Update:  The afternoon (12z) models are in. They suggest rising potential for strong or severe storms Saturday night. As usual for February, this would be a low certainty, high shear/low CAPE event.

Wind energy will be substantial, with the potential to rotate storm cells. This rotation causes updrafts to tilt, making storms taller and stronger, increasing chances for damaging winds, hail, and maybe worse. One way to measure wind energy and shear is via “helicity,” which the GFS model says will be very high. Here’s a forecast sounding for you weather nerds (check out the curved hodograph, egad): 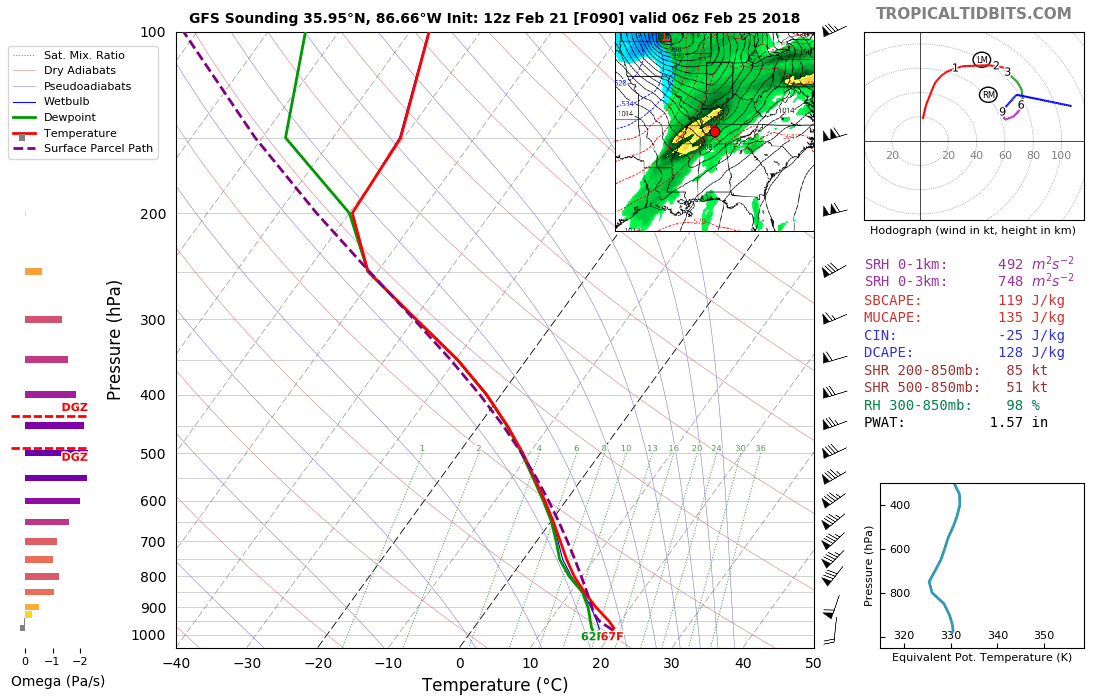 However, the amount of energy to lift into a storm may be limited. This energy is measured by “CAPE.” CAPE is kinda like an egg if making a storm is like trying to make an omelette — you can have a pan, some heat, ham and cheese and tomatoes, and an excellent breakfast chef — but if you only have 3/4 of an egg to make an omelette, it kinda falls apart.

The EURO model shows about 300-500 CAPE (egg) for us. That’s low, but not all omelettes fall apart at that level, and to be clear we have had severe weather with this setup before. 500 CAPE is an egg or two for the storm omelette. If all goes “right,” you can make that omelette. 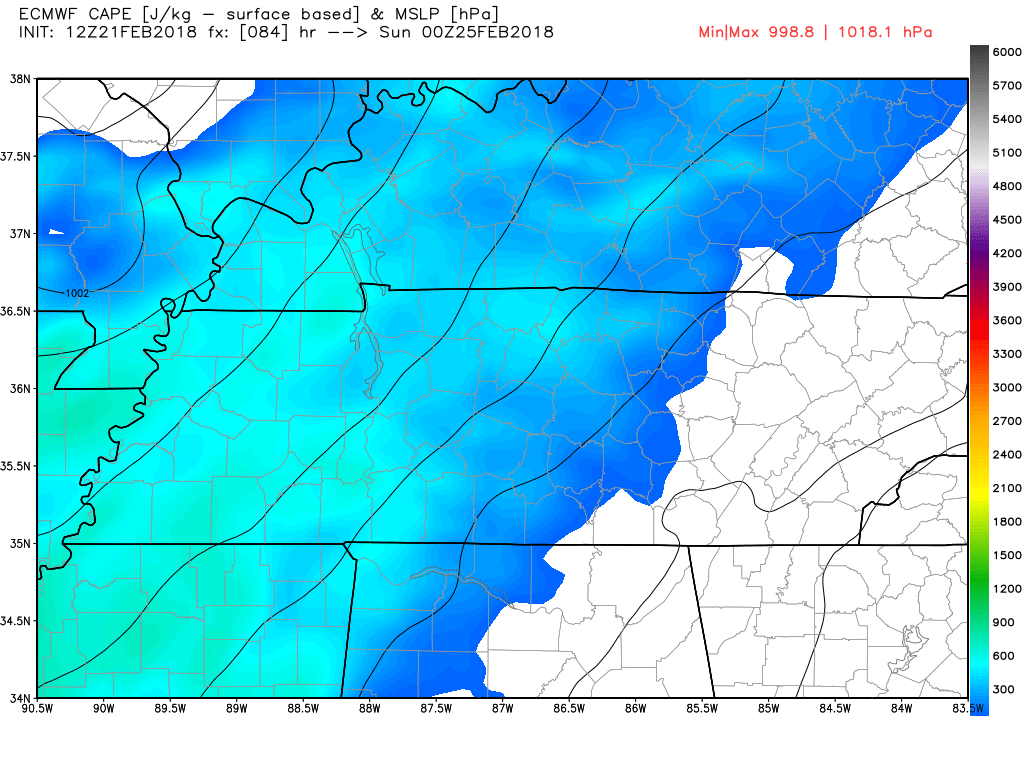 A CIPS analog is an effort to compare predicted atmospheric conditions with those present in past severe weather events. It’s trying to match hindsight with foresight. It’s far from perfect, like all future predictions it has errors, but it is a useful tool. Anyway, the CIPS analog is lighting us up for severe weather potential Saturday night.

Major analog signal on @CIPSAnalogs for severe weather Saturday evening/overnight. This is the % of events in top-15 analogs w/10 or more severe reports w/in 110 km of each grid point. pic.twitter.com/06ddeLRvaY

Full disclosure, when I saw that, I reacted in a manner inappropriate for mature public discourse.

I’m omitting quantifying tornado potential for now. It’s too soon to say. If asked, I’d say all modes of severe weather are possible Saturday night, including damaging winds, hail, and a tornado, but none are part of a reliable forecast right now. To use another analogy, suppose you tossed a ball over your neighbor’s 8 foot fence. You would not know whether that ball landed in the pool (damaging winds), garden (hail), a flower pot (tornado), or elsewhere in their big ole yard. Also your ball may have been eaten by your neighbor’s dog.

Schrödinger’s cat: a cat, a flask of poison, and a radioactive source are placed in a sealed box. If an internal monitor (e.g. Geiger counter) detects radioactivity (i.e. a single atom decaying), the flask is shattered, releasing the poison, which kills the cat. The Copenhagen interpretation of quantum mechanics implies that after a while, the cat is simultaneously alive and dead. Yet, when one looks in the box, one sees the cat either alive or dead not both alive and dead. This poses the question of when exactly quantum superposition ends and reality collapses into one possibility or the other.

We won’t know until we look into the box whether we’ll have enough CAPE for big storms Saturday night.

My current anxiety level is: Low, but very interested. The main message, y’all, is flooding. Don’t drive across flooded roads!

We’ll keep you posted on any changes.

Be sure to join us for SWAD 2018! Lots of fun activities for families and your inner weather nerd.