The warning system did well for the “Gladeville” Tornado, because it showed itself on radar.

Winds picking up big time in Cane Ridge as it crosses I-24. 444 PM pic.twitter.com/8NPsZo9cIH

At 4:52 PM, the tornado began to develop, seen well on radar.

Area south of Percy Priest Lake trying to wrap up with rotation. Watch closely if nearby. Radar from 450 PM pic.twitter.com/tKUWccspVf

NWS told media the Tornado Warning was coming at 4:53 PM.

The Tornado Warning issued at 4:54 PM, before tornado damage was seen.

. . . advances in radar confirmed it as a tornado with debris signatures . . .

. . . and it was clear where it was going as it raced east of Davidson County into Wilson County toward Gladeville, where the EF-1 damage was seen.

Torando moving to you, with debris confirmed on radar.

That’s exactly where it went.

(Wish I had spelled that “Tornado,” but I think you got the point.)

Many “squall line” tornadoes , aka “QLCS” (Quasi Linear Convective System) tornadoes are missed because (1) they do not show themselves on radar, or (2) they are so brief they occur between the 60-70 second scans of the radars.

Usually we have three radars on a storm coming into metro, but we were down two of those last night. The radar at Hopkinsville was down, and TBNA radar was too far away and the beam it shot at the storm was a mess. But the OHX radar saw it. We were all looking at the data in real time.

At 4:28 PM, one minute before the tornado touched down, I tweeted there were 70 MPH winds at Joelton, but at the time I did not think it was a tornado.

Line about to cross I-65. Damaging straight line winds the main concern. 428 PM. Winds over Joelton possible over 70 MPH per radar. pic.twitter.com/GIWHEBh962

Today I went back and reviewed the radar data. There were radar scans while the tornado was ongoing, at 4:30 PM and 4:31 PM. Knowing I’m looking for a confirmed tornado from a storm survey, I can see it on radar. 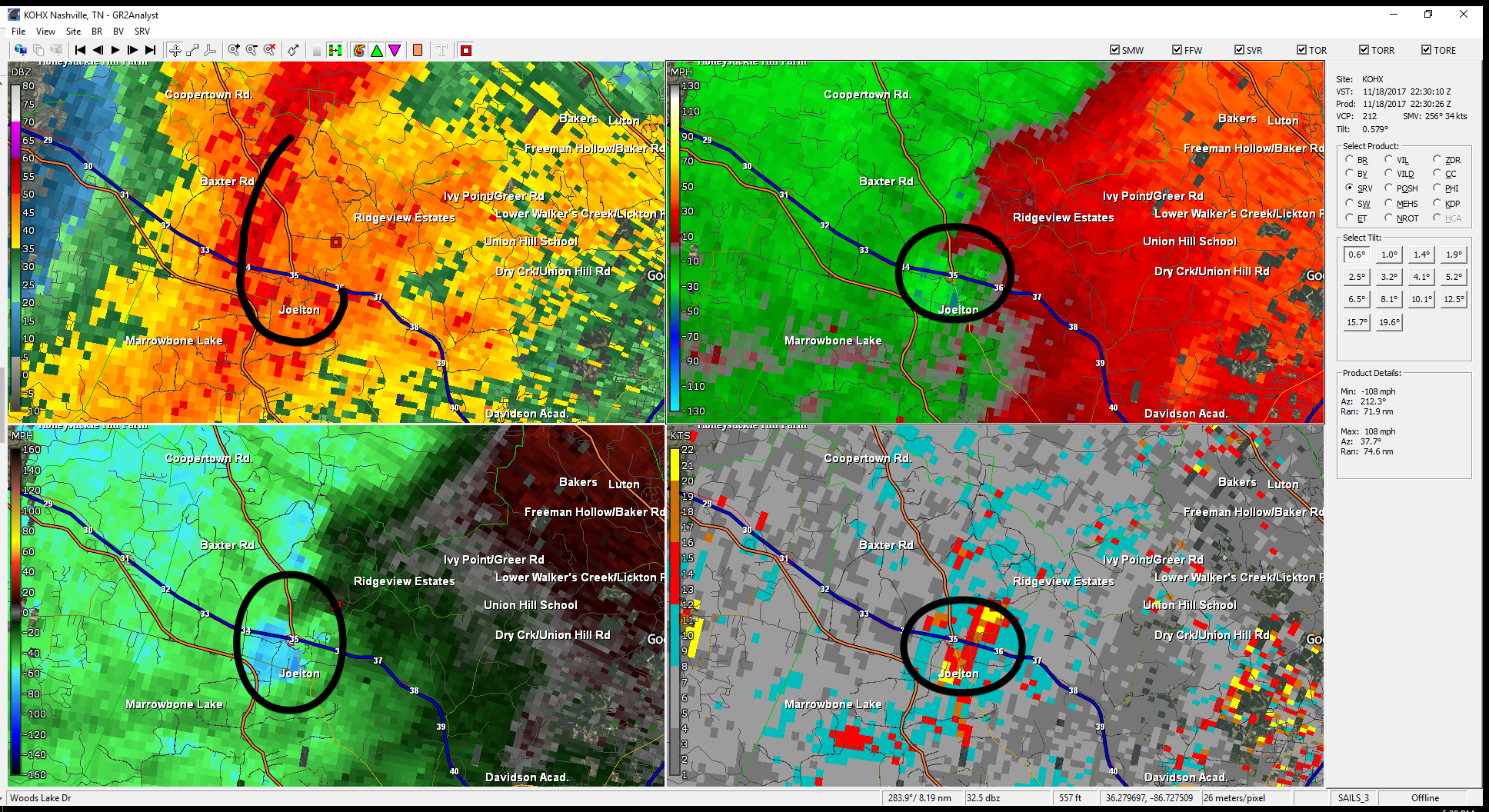 Despite that presentation, NROT (normalized rotation) scores were well under what we saw with the Gladeville tornado, and the CC (correlation coefficient) used to determine whether unlike things (such as debris) had been lofted, well, that too was unimpressive even though it was there. It was interpreted as an unclear signal of lofted debris. 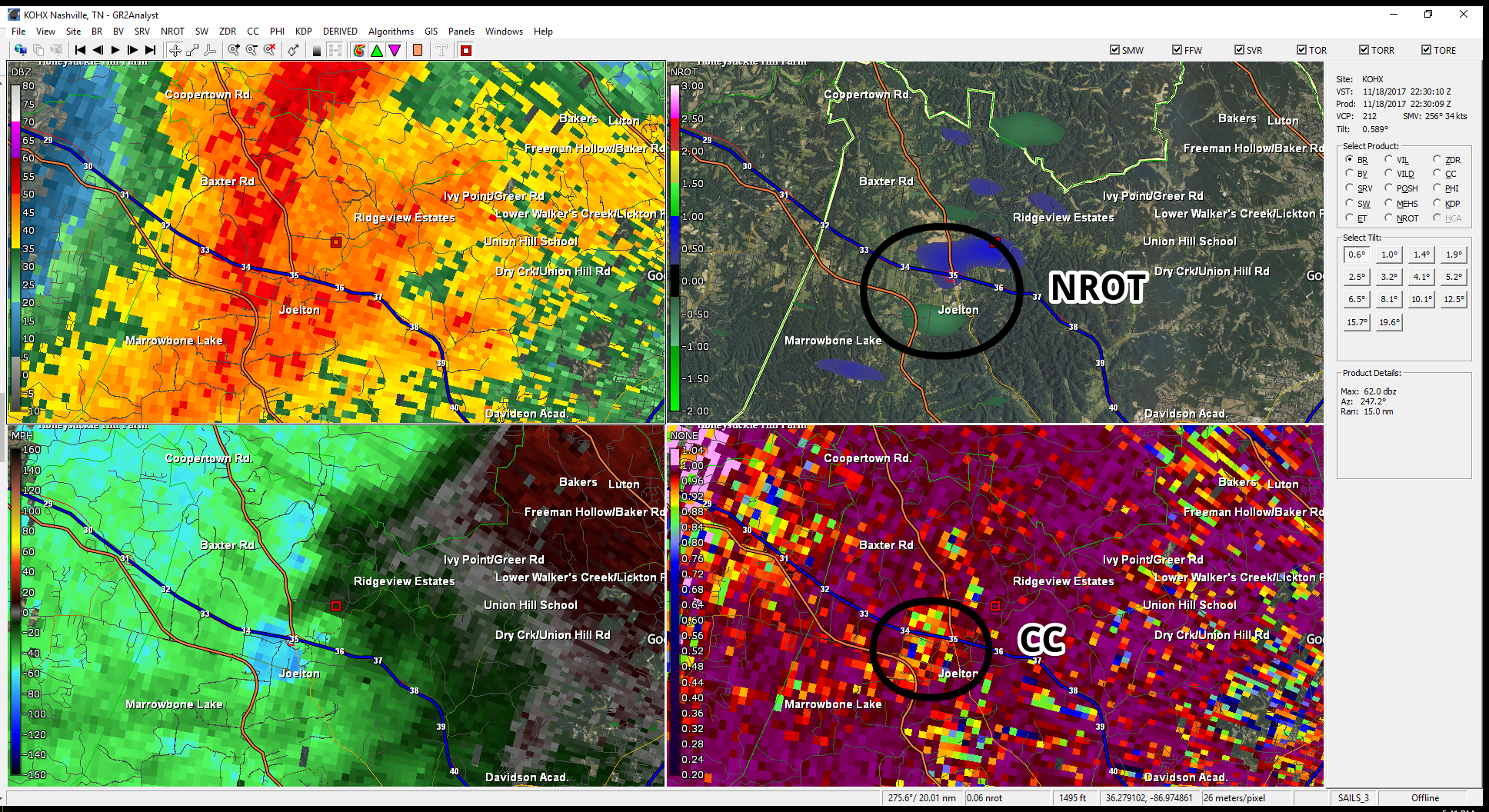 Detecting QLCS tornadoes is very difficult; this was a very close call. It’s easy to sit here and second guess it with hindsight. Had I been at the warning desk, I would not have warned based on the scan at 4:30 PM. After seeing the next scan, at 4:31 PM, a warning could have been justified, but by the time the warning would have been issued, the tornado was gone.

If every single “kink” inside a QLCS line is tornado-warned, the result will be dozens and dozens of false alarms. Many times a storm will present the way the Joelton storm presented on radar and not produce a tornado. Studies show overwarning causes inaction, which is also dangerous. There’s a clear tension here.

Further, when this tornado struck, there had been no prior evidence this particular QLCS could produce a tornado. The Gladeville tornado occurred about 25 minutes after the Joelton tornado.

Some may excuse it, perhaps saying there technically was a “tornado possible” advisory attached to the Severe Thunderstorm Warning . . .

. . . but who takes cover from a “tornado possible” tag? Very few people. At the end of the day this was a miss.

I’m happy no one was physically hurt.

I’ve lost count how many times I’ve ranted about how the NWS issues warnings based on a polygon system and Nashville activates its sirens on a county-based system. They’re two members of a band reading off different sheets of music, and the song sounds terrible.

Rather than launch into another rant, let’s just state two plain facts about last night and leave it at that.

Expect a hard freeze tonight, lows in the 20°s overnight.

Monday & Tuesday we warm up just a bit with highs Monday in the mid-50°s and highs Tuesday near/to 60°.

All in all, Thanksgiving looks pretty great. No real weather hazards for those traveling in and around the area, sunny skies for all outdoor activities, and cool temps look to set up a nice Thanksgiving holiday.

Saturday looks a bit warmer with highs reaching back into the 60°s. Another dry cold is expected to drop temps back down Sunday.

Looks dry, with precip below normal next weekend into early next week.