Y’all apparently have stuff to do outside tonight & this weekend, so I thought I’d do a second post today with either (a) updated data or (b) fresh wild guesses. I’ll let you decide whether it’s (a) or (b).

The coldest recorded high temp for July 18 in Nashville is 73°, set in 1876, during the Grant Administration.

Either it’s an old photo, or dude had dandruff

So, you could say we are reaching out and shaking his hand (appreciate the man!), then breaking his record. Friday’s high temp was recorded just after midnight (70°). We’ve been in the 60°s ever since, and I’ll be shocked if we even make back to 70° before sunset. It has been a dreary fall day in July.

Anyway, go ahead and rule out strong, and certainly severe, thunderstorms this weekend.

Some of y’all are going to this:

Scroll back up to the top of this post and have a look at the regional radar, and you’ll see the quandary before the forecaster. As usual, there’s a giant rainmaking weather system out there, and it can’t decide if it wants to be in Nashville or not.

Note that the radar trends suggest a steady rain until sundown (give or take a few hours), then perhaps it’ll taper off tonight. The lack of a northward propagation of the showers in SW TN suggests so. That said, if you’re going to Fontanel, or anywhere else, you should prepare for light rain. It’s just way too close to us to rule it out. I suggest you designate a sober driver, wear water-friendly shoes, have a good time, and you won’t care about the light rain. 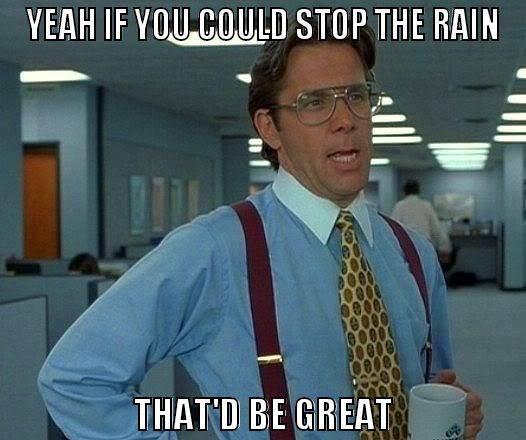 Well, maybe not great. The beginnings of drought conditions have been creeping into Middle TN, and even encroaching on N Davidson Co and SE Williamson Co:

Suppose you are a good friend of @NashSevereWx and you planned a slip-and-slide birthday party at your house starting at 11 AM, and your plan to move the party to Sunday because of weather was frustrated by the fact the rental company didn’t think the weather would be bad enough to allow you to cancel without losing your deposit. What should you do?

By 6 AM, the RAP (a short-range model, which theoretically should be more accurate) has the overwhelming majority of the rain E and NE of Nashville, moving away from us:

The next “best” (coughing uncontrollably, no such thing) weather model I’d review is the Hi-Res NAM—which by the way continues to have a pretty good summer performance-wise—has almost all the rain out of here by party time (11 AM):

This seems to follow the RAP’s idea of what’ll happen. Even the GFS and Euro models sort-of agree with this. So, that’s encouraging.

Temps may be a bit chilly for slipping and sliding. Temps should still be in the upper 70°s by noon, with a high in the middle of the afternoon of 82°. I would move the party to 2 PM!

There remains a chance of rain in the afternoon, though. I don’t think it’ll be sunny, but clouds should decrease a bit during the day. Rain chances will continue to decrease into the evening hours.

The big weathermaker will have moved out, but south winds will return. There may be an afternoon shower or two, but that’s unlikely, and if it happens, it shouldn’t wash us out. Definitely a better weather day than Saturday.