By 4:06 p.m., a band of light showers arrived in Middle TN, moving into Davidson & Williamson Counties:

Regarding these showers, the NWS said:

“We continue to expect the showers to become lighter and scattered as they spread eastward late this afternoon and evening. Rainfall amounts . . . around 0.10″ inches at BNA ….”

This is verified by the latest run of the HRRR, which predicts shrinkage of the rain blob by 8 p.m.:

The showers appear to shrink after they come across I-65, so like George Costanza, the shrinkage excuse ultimately proved ineffective. 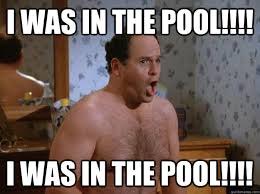 Titans fans should expect rain for the second half.

Chance of rain overnight remains only 20%. Moisture will linger, but there’s very little lift to get the showers going.

A disturbance + arriving Gulf of Mexico moisture may team up and bring rain; however, weather models differ, so the best thing to do here is equivocate and say “there’s a chance of rain.”

Weather models remain is disagreement, but “the general expectation is for some shower and storms Friday night into Saturday, followed by a shot of dry and much cooler air from Sunday.”

Next week we’ll start out with lows in the 40s, with highs in the 60s.