Week Ahead: Reschedule This Week’s 5K with Grandma

A few showers, and maybe a few weak thunderstorms, should stream in from the SW, moving NW. Storms usually come from the opposite direction, so we call these unusually-moving storms “Crazy Ivans.” These Crazy Ivans will be off and on.

Any showers we get should not wash anyone out, but take an umbrella anyway, especially if you’re going outside (like to Crockett Park for the concert series).

HRRR rainfall estimates through midnight tonight. Notice the heavier rainfall should miss us to our SW.

Patchy early morning fog is possible; otherwise, the day will be hot and humid. The summertime pattern returns — any storms that develop could be strong, or even severe — but these showers/storms will be widely spaced and may not impact you. We’ll be playing the “Will It Storm?” game.

Shower/Storm coverage should decrease after sundown, with the associated loss of storm-fueling afternoon heating.

Much like Monday, except maybe a little warmer. Random and isolated late afternoon/early evening showers and storms are possible. 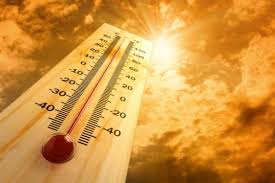 As temps climbing into the 90s team up with low-70s dewpoints, heat indicies (what the temp “feels like”) will approach or exceed 100.  You may want to reschedule that 4 pm 5K with Grandma.

Official temps are taken in the shade in order to measure the only air temperature, rather than the air temperature plus the sunlight’s heating of the thermometer itself.