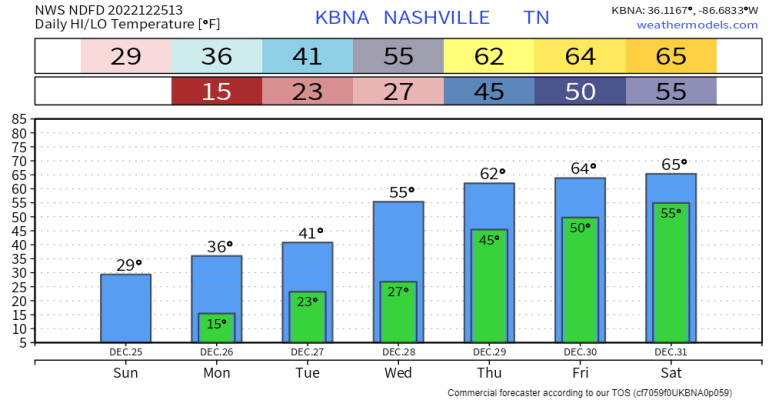 We’ll take waking up to temperatures in the upper teens, certainly feels like Christmas! Winds have died down, so wind chill isn’t much of a factor, but it’s still cold. Certainly not the 76° we had last year…but at least it’s not also a high of 15° like in 1983.

High temps will make it into the upper 20’s, no rain or snow. Officially, not a “White Christmas” since there isn’t an inch of snow on the ground, but it’s a lot closer than what we’ve had in recent years.

Temps will dip back into the teens tonight one last time for at least a little while. Tomorrow a clipper system moves through our area, bringing us a chance at maybe seeing snow, but impacts look minimal as it’ll be moving quick, and the Dry Air Monster should take care of most of it. Looks like maybe a dusting to half an inch. We should also (finally) get above freezing for a little bit, also helping minimize impacts.

Tuesday we’ll really begin our warming trend as temps will reach the low 40’s. They’ll increase a little every day until we reach the mid 60’s by late week. That’s almost as nice as a one-year membership to the jelly of the month club. Looks like we’ll have some rain chances as we ring in the new year, more details on that later.