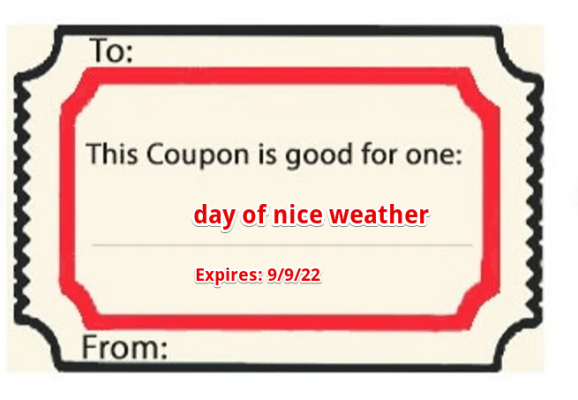 Mid 80’s for high temperatures, with dewpoints in the mid 50’s will have you feeling great. By Friday dewpoints will creep back up into the mid 60’s as a developing upper low brings in moisture, raising rain chances.

HRRR model (above) thinks Friday night games look good to go, with only a few showers passing by, mainly to our south. The majority of the rain looks to move in Saturday morning.

Think it’s important to note, the NAM3k model this this band of rain arrives Friday evening, which would leave football games wet. It’s also about the only model that think the rain arrives this early, so I’ll lean towards the HRRR’s solution, but the other option is still on the table.

Saturday looks to be on/off rain, the EURO model (below) thinks the majority of the rain falls in the morning, leaving more scattered showers/lightningstorms for the rest of the day. Outdoor activities may be spared, but a plan B that involves shelter/being inside seems like a good idea. No severe weather expected.

Sunday looks fairly similar to Saturday in the means of on/off rain chances all day. Looks like the Titans game will probably get rain at some point, the question is how much and will there be lightning? Too early to tell. Poncho/rain jacket looks like a necessity. Not concerned about severe weather.

We look to clear out Monday with maybe some showers lingering around early. Setting us up for a nice start to the week, as we get our first taste of “false fall,” highs will barley reach the 80’s, low’s dipping to around the 60° mark, and dewpoints sitting comfortably in the mid 50’s. Won’t last too long as long range models indicate we get right back into the 90’s by late week.