Tornado Watch Until 2 AM

As expected, the Storm Prediction Center has issued a Tornado Watch that includes all of Middle Tennessee, in effect until 2:00am.  The watch itself is HUGE, encompassing parts of eight states, and well over 100 counties:

Some highlights from the watch discussion:

SUMMARY…Storms are ongoing across portions of southeast Missouri and vicinity, and also across the central and eastern Kentucky vicinity. Expect storms to expand in coverage over the next couple of hours, to include large portions of western Kentucky and western and Middle Tennessee. Storms will spread southeastward with time, into portions of northern Mississippi/northern Alabama, accompanied by potential for large hail, damaging winds, and a few tornadoes through the evening hours.

This will be the last blog update for this particular storm threat.  David, Will, and Andrew have you covered on Twitter and Periscope throughout the evening, and follow @NWSNashville for good measure, along with your favorite media sources.  (Always consult multiple sources of information!)

Once again, no significant changes to the Storm Prediction Center’s severe thunderstorm outlook.  The tornado probability map shifted just a bit, so I’ve updated that in this morning’s post (below).

Within their discussion, the SPC forecasters said, “To the southwest of the ongoing [storms] across the Ohio Valley, redevelopment of scattered severe thunderstorms is still expected across the Enhanced and Moderate Risk areas, though the timing and exact location of initiation remains uncertain.” (Emphasis added.)

DON’T BE FOOLED BY THE FACT THAT THERE AREN’T ANY STORMS YET.  The forecast models are in rough agreement that 5pm to 10pm is “go time”.  The National Weather Service is on the same page — specifically, it mentions that they expect things to really get going after 6pm, an assessment with which I agree.

I expect that at least part of Middle Tennessee will be included in a Tornado Watch in the next few hours.  I’ll update this post again when that happens.  Until then…

Late-morning model runs are a little less goat-rodeo-ish…but they’re converging on a storm ETA between 5pm and 7pm.  That’s not good.  But there’s still significant uncertainty regarding exactly when the storms will fire up.  NWS-Nashville is anticipating it could be anywhere from 2pm to 2am.

New outlook from the Storm Prediction Center contained no significant changes from this morning’s outlook.

Summertime usually brings us “garden variety” storms — they drop plenty of rain and cloud-to-ground lightning, and sometimes they even produce damaging winds and hail…but we rarely see a significant severe weather threat this time of year.

Today is the exception to that rule.

An unusually powerful storm system will move towards Middle Tennessee today — it’s the same storm system that brought tornadoes to Iowa and severe wind and hail to Kansas and Missouri yesterday.  The chance of storms that was in the forecast this morning missed us to the north, so the parent storm system will have a juicy and unstable atmosphere to work with when it arrives.  Before the best chance of storms develops, temperatures will hit the low 90s: 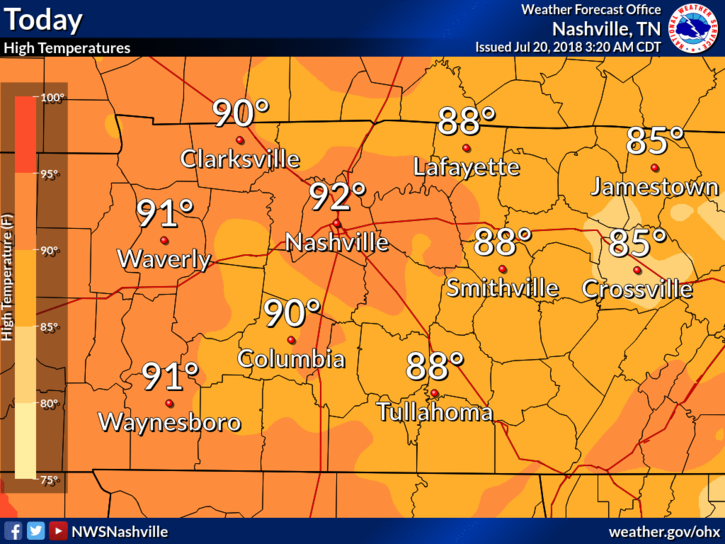 And the humidity will be substantial, with dew points well into the 70s:

All of that isn’t unusual — it’s almost always hot and humid in July.  But heat and humidity (and the thermodynamic energy they provide) are just two of the ingredients in any severe weather scenario.  I’ve used the baking analogy before, and it’s still the best way to think about these environments: you don’t take your pick from flour, sugar, eggs and chocolate chips to make cookies — you need ALL of them, and in the right proportions.  If you have a bunch of flour, just a pinch of sugar and one small egg, you’re going to end up with some funky-tasting cookies.

For severe storms, the ingredient list is pretty short: a hot and humid air mass, wind energy to organize the storms, a trigger to get the storms started, and cold air in the upper atmosphere to allow the storms to explosively develop.  In the summer, we usually lack the wind energy and upper-level cold air, but today’s scenario is different.  In addition to the hot and humid conditions, the storm system moving in will bring a cold front (that’s the trigger), upper-level cold air, AND remarkably high wind shear for this time of year.

Okay, enough about the setup.  You’re here to find out what we think it going to happen.  The forecast models are, to be quite honest, a goat rodeo.  The HRRR model waits until after sunset to bring in the storms:

The WRF model dodges evening storms off to our south, then brings in some stronger storms after midnight:

The RPM model shows storms developing in the early evening, which then race to the south (followed by more late-night rain): 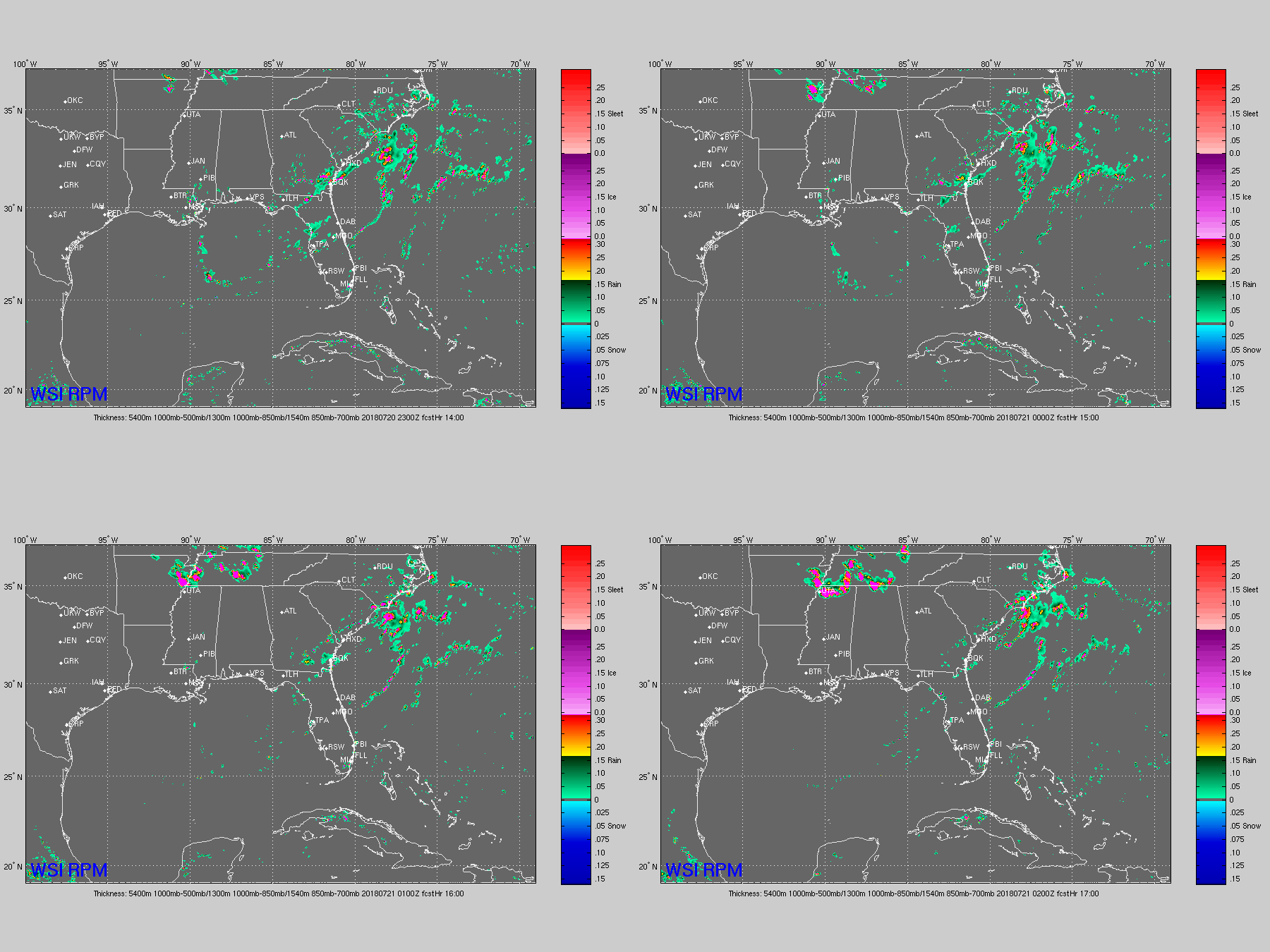 I definitely lean toward the RPM model’s version of things, and unfortunately that’s the worst-case scenario.  We’ll be watching and waiting throughout the day.  Any storms that pop up during the early afternoon might help to stabilize the atmosphere…I wouldn’t count on that, though.  The good folks at the National Weather Service are thinking the same:

SCATTERED TO NUMEROUS SHOWERS AND THUNDERSTORMS ARE EXPECTED TO DEVELOP LATE THIS AFTERNOON AND EVENING ACROSS SOUTHERN KENTUCKY, THEN SPREAD SOUTHEAST ACROSS MIDDLE TENNESSEE INTO TONIGHT.

The Storm Prediction Center has outlined a “Moderate Risk” (level 4 of 5) of severe weather for roughly the northwest half of Middle Tennessee, with an “Elevated Risk” (level 3 of 5) elsewhere: 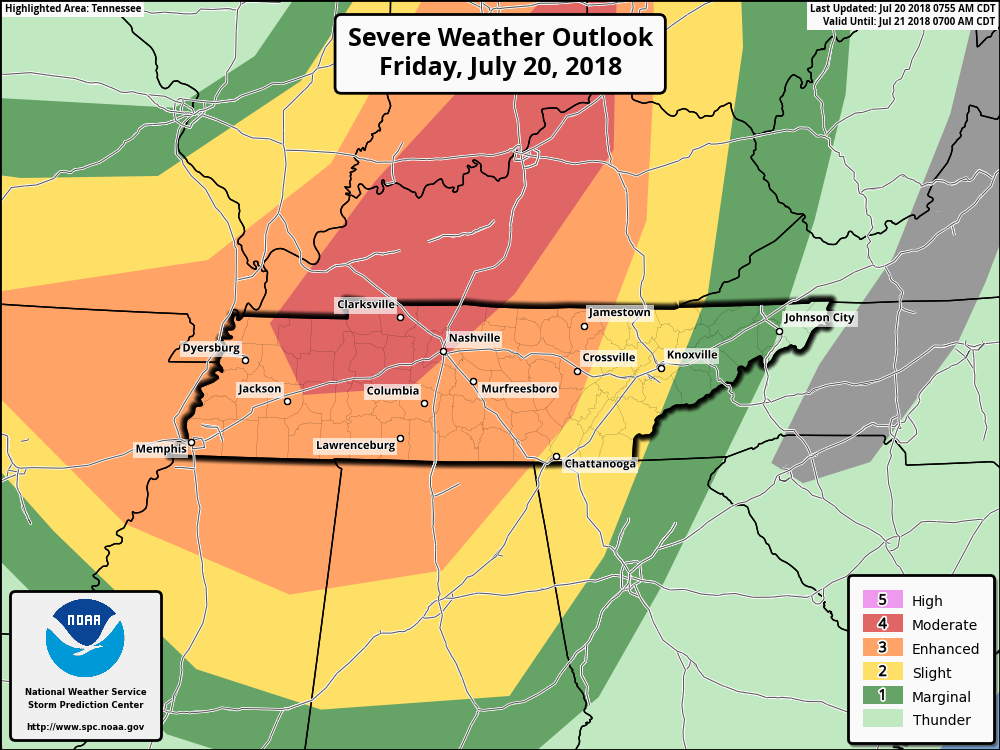 The dividing line runs right through Davidson and Williamson counties, but storms aren’t compelled to respect those human-drawn boundaries.  Probabilities of “x” within 25 miles of you…

Tornado: 5% in Davidson and Williamson counties, 10% just northwest of Nashville.

That tornado threat is obviously a concern.  The SPC’s own forecast model shows a “Significant Tornado Parameter” around 4 (that’s high) this evening across much of Middle Tennessee:

And the wind threat looks troublesome as well — the “Derecho Parameter” gauges the risk of a prolonged and widespread damaging wind event, and it’s also elevated this evening:

At this point, I can imagine most of you are in this frame of mind…

But here’s the thing about predicting the weather…we never have a complete picture of what the atmosphere is doing right now.  That’s why we deal in probabilities, not guarantees.  If one parameter in the atmosphere changes, everything down the line changes too.

So the bottom line is this: Be PREPARED for the possibility of violent storms from late afternoon through this evening.  I would absolutely LOVE to be wrong about the storm threat, but it’s a serious situation that you should treat seriously.  Stay plugged-into the forecast for changes throughout the day, consult multiple sources of information, and be ready to react if the weather becomes threatening.  Don’t panic.  Don’t lock yourself in your safe place for the next 24 hours.  Don’t load up the UHaul and move away.

Returning to the cookie analogy — we’ve got all of the ingredients.  It looks like they’re all measured correctly.  But maybe we’ll forget to turn on the oven.  (This is the point at which the metaphor breaks down, I guess.)

Stay weather-aware, embrace the uncertainty, and we’ll keep you updated — I’ll add updates to the top of this post as more data comes in throughout the day.

Thanks to David for inviting me to write this up — your usual editors had some personal-life responsibilities today, so I’m glad to help out.  Surf on over to my daily blog — the weather focus is on on central North Carolina, but the daily nerd-links are for everyone!

Editor’s Note: Thanks Paul. Allow me express the overwhelming opinion of those in Nashville and Middle Tennessee to say we miss you and we are worse off without you. You’re always invited to drop in here. Best wishes in North Carolina.

View all posts by PaulHeggen