* you will not think the outlook is spectacular

What About This Year?

First, a note of caution: I’m about to show you medium to long range weather models/forecasts. They’ll give only a broad idea of what might happen. As we say, use for guidance, not Gospel. and maybe again on October 24. Halloween does not look warm, but again, this is way too far away to draw any conclusions.

Last week AccuWeather released its Winter 2013-2014 Highlights. For us, instead of snowfall, it predicted: 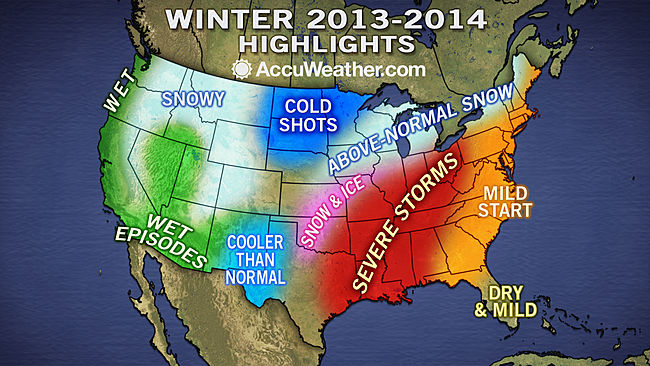 Severe Storms!  Even though the spring of 2013 was a very slow severe weather season, and the summer/fall has been quiet (as usual), don’t forget: we have tornadoes in the winter. Of the costliest tornadoes on record in middle Tennessee, half occurred during the winter:

There was also this year’s January 30 outbreak, which spun 23 tornadoes across middle Tennessee.

Anyway, back to the snow stuff: 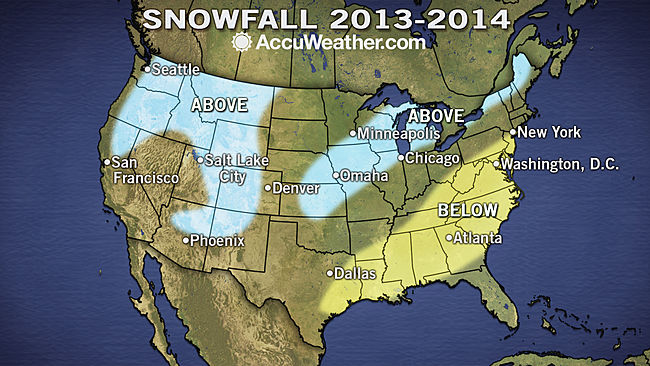 Note: we could triple last season’s snowfall and still have a below-average snow season.

Discouraged? Don’t be. As this Washington Post article points out:

“AccuWeather is attempting to get the winter outlook right in the D.C. area for the first time since 2009-2010, when it correctly forecast a prolific snow producer prior to the record-setting Snowmageddon winter.

Since then, it’s been off-the-mark three straight years.”

This isn’t just true of D.C.  Seasonal climate prediction is hard. For example, NOAA (and others) forecast “an active or extremely active” hurricane season this year. In fact, thankfully, the opposite happened.

So, take all this stuff with a grain of salt. It’s worth mentioning, but don’t sell your sleds and cycle into depression over it.

At least AccuWeather, NOAA, and others apply science, in contrast to the Farmer’s Almanac’s Super Storm at the Super Bowl “prediction.”

Despite the difficulty in “getting it right,” some info is better than none. NOAA’s Climate Prediction Center thinks temps will be above average November through January:

Precipitation from November through January looks to be on average:

So, when will it snow? Yeah, we don’t know, and neither does anyone else.

May you all get exactly as much snow as you want.

*see, wasn’t spectacular, was it?